“Only 13 minutes of the beginning and end sections survive of a 40-minute early silent feature comedy film by Yasujiro Ozu.”

Only 13 minutes of the beginning and end sections survive of a 40-minute early silent feature comedy film by Yasujiro Ozu(“Women of Tokyo”/”Tokyo Twilight”/”Tokyo Chorus”), enough to reveal what the story is about.

Little Senbo (Tomio Aoki) is playing hide-and-seek in a back alley with his friends when a kidnapper (Tatsuo Saito) befriends him by making funny faces and then persuades him to go with him by buying him treats and toys. The irascible kid throws a temper tantrum when he doesn’t get everything he wants and begins to drive the kidnapper crazy. When the kidnapper’s boss (Takeshi Sakamoto) is also overwhelmed by the kid, he tells the flunky to take him back where he found him. When the kid’s friends see all the presents, they also want to go with the frightened kidnapper who is last seen running away as fast as he can from the pursuing kids.

The pic was based on the 1910 O’Henry story “The Ransom of Red Chief” and was mainly written by Tadao Ikeda. The film made the child star, Tomio Aoki , an instant celebrity. 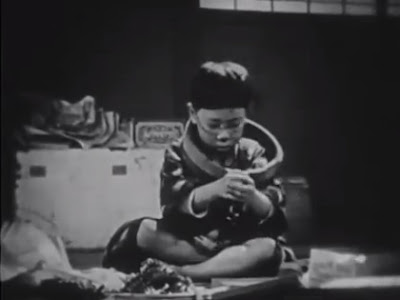