Michael Mabbott’s mockumentary about the rise and fall of the legendary fictional Canadian country singer Guy Terrifico is a one-note silly gag; briefly enjoyable as a goof, but not much else came off sounding good. Country music icons Kris Kristofferson, Merle Haggard, Ronnie Hawkins, and Donnie Fritts all go along with the joke and bring back crocodile tear memories of the self-destructive Guy Terrifico (Matt Murphy, singer with bands The Flashing Lights and Super Friendz), an outlaw country singer who has been missing for the last 30 years and might have faked his death. Once you realize it’s a faux documentary, ‘you can turn out the lights because the party’s over.’ The plot was inspired by Kristofferson’s song The Pilgrim, Ch. 33. The character was inspired in part on the real-life country/rock legend Gram Parsons – someone who never released a single album, who was celebrated for his drinking and wild coke parties and supposedly was one of the best modern-day musicians.

Western Canadian born Jim Jablowski morphs into madman, drunken, hell-raiser country-rocker Guy Terrifico. He wins a $8 million dollar lottery in Vancouver and buys a club in Vancouver to hang out and party with the musical legends. On tour with flatulent girlfriend Mary Lou (Natalie Radford ), he becomes known for humping a drumkit, sabotaging the square Horton Family Jamboree Christian musical variety show in Nashville and being a no show at the Isle of Wight 1970 festival.

The jokes were juvenile (like breaking wind) and the portrait of a wild outlaw rock star of the 1970s was unimaginative. The film wants to be funny, but nothing was really funny. I have to wonder what’s the film’s point, except as perhaps a trip down memory’s lane for some of the big-name performers and for them to get together to goof around.

It shared the Best Canadian First Feature award at the Toronto film festival. 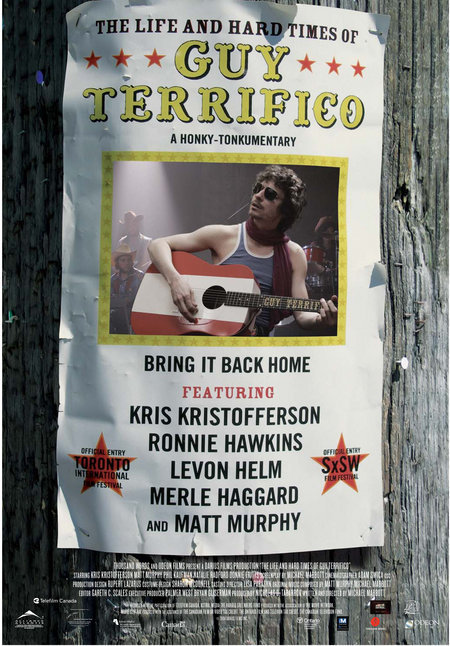