ASSAULT (aka: IN THE DEVIL”S GARDEN) (aka: THE DEVIL’S PLAYGROUND) (aka: THE CREEPERS) (aka: TOWER OF TERROR)

A routine slickly made thriller about a rapist-killer directed without distinction by journeyman filmmaker Sidney Hayers (“Deadly Strangers”/”Diagnosis: Murder”/”Circus of Horrors”) and written by John Kruse; it’s based on the book The Ravine by Kendal Young. An instantly forgettable film.

At the Heatherdene School, a girls school in London, art teacher Julie West (Suzy Kendall) gets a quick peek in the dark of the man who in the woods raped two of her students taking a shortcut home and murdered one of them. The surviving vic, Tessa Hurst (Lesley-Anne Down), is left in a catatonic state. In court, Julie states the killer “looked exactly like the devil,” and her eyewitness testimony is reduced to laughable skepticism. Detective Velyan (Frank Finlay) and reporter (Freddie Jones) help the brave teacher set a trap, using her as bait, to catch the dangerous criminal.

It becomes a whodunit, as the viewer is left trying to suss out who among the many suspects is the culprit. The list includes the cheesy reporter who stalks Julie and calls her”girlie;” the unprofessional psychiatrist in charge of Tessa’s recovery, Dr Greg Lomax (James Laurenton); Leslie Sanford (Tony Beckley), who loves to fondle little girls and is the hen-pecked husband of the school’s headmistress (Dilys Hamlett); or perhaps someone not covered.

The film is weighed down with some absurdly contrived plot devices to make its bogus point that voyeurism can lead to a serious crime by those who become enamored with their inner devil. By any of the number of titles the film wishes to call itself, this one is a facile assault on our senses. 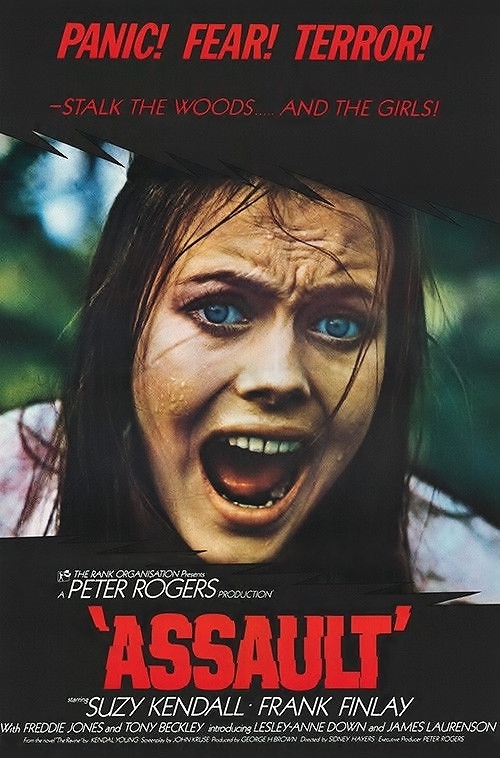