“Looks more like a typical cable TV romantic/mystery story than a feature movie.”

A misplaced stylish B-movie that dabbles in art theft and concludes that a victimless crime of wealthy assholes is not such a big deal. Writer-director Jim Amatullis slight story never gets an edge, gets over in its slick amoral take on things, or generates too much tension. That’s not good, because the screenplay by Amatulli and cowriter Lee Watters is so poorly constructed that without concern about the art thieves as real people there’s nothing left to mull over. This flat production looks more like a typical cable TV romantic/mystery story than a feature movie.

Declining indie star Virginia Madsen (ever since the 1990 Highlander 2 debacle) plays Emma Becker. She’s a former amateur artist who quit and is in a permanent funk ever since the death of her premature baby. Her insurance salesman husband Bill is a cold fish and a loser; their marriage is on the rocks. Emma makes bread as the owner of a home security business and gets clients steered to her by her caring elderly widowed father Howard Deardorf (Daniel von Bargen)–the Cincinnati police chief.

At a local gallery, Emma falls for crooked art gallery owner Bret Rogers (Rick Rossovich). They begin an affair, scheme a way to combine their talents to rob their rich clients of their paintings. They rationalize their greed and criminality by pontificating that they deserve to be robbed because they don’t understand the value of art like they do. They are helped in the thefts by Bret’s loyal gallery employee Cory Wells (Eddie Mills), who is an ex-con and an expert burglar.

Everything is so tedious and lacking emotional strength, including the romantic scenes, the house break-ins and an idiotic ending to a film that deserves such an ending. When Madsen is on the screen, this mess is somehow watchable but not salvageable. When she’s not in a scene the movie hits rock bottom. 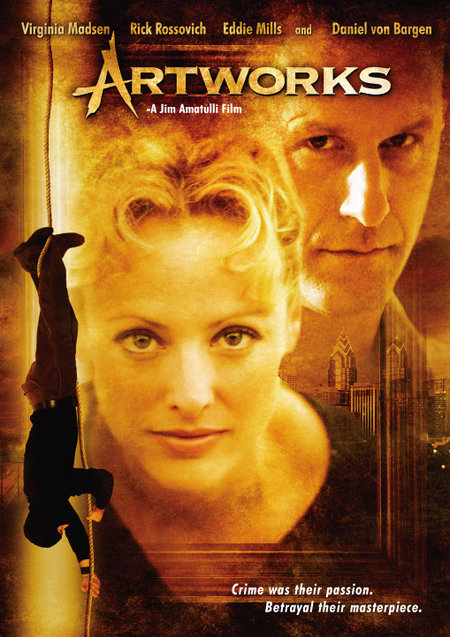