“Oy! Another Woody comedy about a neurotic making the Manhattan scene.“

Oy! Another Woody comedy about a neurotic making the Manhattan scene. This must be the 67-year-old veteran filmmaker and actor’s trillionth such vehicle, but at least he exercises some good judgment by not sleeping with 23-year-old cutie pie Christina Ricci. The romantic honor of wooing that manipulative catch goes to American Pie’s presentable young star Jason Biggs. He plays Woody as a mousy twenty-something who inhabits the nebbish’s self-doubting personality and neurotic behavior and clumsy social graces. Jason is Jerry Falk, a struggling comedy writer working on writing a great novel but who is stuck with a useless manager Harvey (DeVito), an uncommunicative psychiatrist (Hill), and a difficult aspiring actress girlfriend Amanda (Ricci). In order for him to get his act together and not be dependent on anyone else, he is advised by a bitter old man he meets in his manager’s office to not fear going it alone. Woody is the misanthropic David Dobel, also a comedy writer but too frightened to leave his secure teaching job with the NYC Board of Education. He’s a wisecracking lunatic and a woman-hater, believing in the wisdom of Henny Youngman type of gags over Freud’s or any religious leader’s spiel, who is given to occasional outbursts of violence and a rapid-fire verbal onslaught to anyone who will listen about all the dangers in the world and how the world wishes to persecute the Jews. The odd couple converse while sitting on a bench in Central Park, as the kid pours his heart out about the twisted way his sexy girlfriend is treating him and he doesn’t know what to do about it because he’s so physically attracted to her–especially when she roams around the pad in her underwear. Dobel impresses the kid with his big vocabulary, knowledge of books and philosophy, paranoia about being Jewish, belief that God is dead and therefore one better not rely on him for help, and the hopeless way he looks at life and makes quips about his insecurities. In other words this is a familiar Woody work, just rehashed and delivered by surrogates with younger faces and more energy.

By making the romance only between the young bloods, the next generation of Woody disciples, it makes this a stronger entry into the long list of similar themed comedies about the nebbish, his Jewish angst in relationships and his battles with his many neurotic disorders and unhappiness. I think there’s enough good dialogue, funny one-liners and quirky situations here to say we have a winner, or at least Woody is back in form with this low-key effort after some of his more recent lackluster works. I’ve come to accept that he is unable and unwilling to try something fresh and has given up trying to emulate Ingmar Bergman, but the good news is that this film revives the old Woody comedy formula just by tightening the dialogue and going for a few cosmetic touch ups in filming style–like having his alter ego Jason talk directly to the audience to explain his thought process in the middle of many a scene and using long takes to focus on the protagonists going into their tizzies. Though the biggest change was in starring Ricci and Biggs to attract an audience from among the younger generation and make the Manhattan singles scene more credible. I can appreciate Woody finally realizing that his strength is in comedy and not drama, and that his fan base is dwindling and his flicks need to be revitalized with not only fresh young faces but updated with a more germane NYC patter.

The plot involves the wormy Falk dumping his sweet wife Brooke for the undependable sexpot Amanda, and then finding he’s so blindly in love that he doesn’t know how to handle her when she disappoints him at every turn and on top of that is a medical pill-popper, a whiner, and suffers from an eating disorder. When they move into her pad the flighty self-absorbed dish lays many unreasonable demands on him and refuses to have sex with him for as long as six months because she loves him, though that doesn’t stop her from having sex with her acting teacher and flirting with other men. To make matters worse Amanda’s even more flighty mother Paula (Channing) leaves her doctor hubby and moves into the cramped pad, where she has a piano moved in as she has visions of doing a singing act in a nightclub. One night, Paula in desperation to regain her lost youth, returns with a much younger boyfriend and they snort cocaine on the disgruntled Falk’s laptop computer. Falk seeks the advice of the acerbic Dobel on what to do, as Woody goes through his usual riffs about women being unable to keep their commitments, how useless are shrinks and men of the cloth, and how showbiz managers are oily characters who pretend to care about their client when all they care about is the percent that get.

Everyone is a neurotic in this story, which is perfectly the norm for a Woody flick as quirky conversations stretch from writers Dostoyevsky to Tennessee Williams. There’s also the funny image of Woody taking his teenage hoodlum-aspiring class to a Caravaggio art exhibit. There are many blues numbers in the background sung by the great Billie Holliday, and cinematographer Darius Khondji captures the beauty of a serene Central Park and a graffiti-free Big Apple. Woody doles out some questionable advice about how to breakup with your girl, shrink, manager, and city, and in order to survive the inevitable world disaster he recommends getting a firearm and a survival kit. In one quip the DeVito character says “funny is money.” I guess that means life is like anything else, so you might as well laugh all the way to the bank. If it’s a serious philosophy you want or an appreciation for women or romance, you won’t get it here. But if you are just looking for a slight comedy with the usual brand of Woody Allen sick humor dished out, then you are in business. You will thereby find that even though this work is no Annie Hall, it nevertheless can be appreciated for at least still having more wit than most modern romance/comedies in today’s multiplexes. It would be hard to find another such film with the following wisdom dished out so casually “Work gives the illusion of meaning. Sex gives the illusion of continuity.” 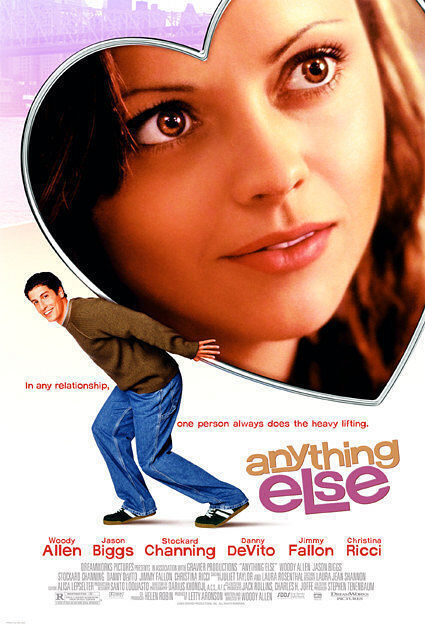