“This is a classic in bad sci-fi B-movies.”

This low-budget, inane, cheesy, message orientated sci-fier was of such poor quality that it was laughable and entertaining in a way goofy films sometimes can be. It’s about invisible aliens coming down from the moon to destroy the Earth unless all the countries in the world surrender and stop building nuclear weapons. They send their warning message through pacifist nuclear scientist Adam Penner (Tonge), because they feel in sympathy when he quit his scientist post with the government’s nuclear program after his friend, Dr. Karol Noymann (Carradine), blew himself up in a lab explosion. The clunky message (the way the film presents it is clunky), is that all the world’s nations should be working for peace and not getting into the nuclear arms race. It wants to show that the world’s nations can work together in a common cause to defeat an evil enemy of the world, and if they worked together in peace they could build a better world or is it a mousetrap!

The invisible invaders get into the corpse of Noymann and have him visit the startled Penner, who is asked to deliver the message to Washington about their threat in 24-hours to destroy the world. Penner asks a young colleague, John Lamont (Hutton), a romantic friend of his secretary daughter, Phyllis (Jean Byron), to tell them about the threat. Naturally they think Penner has gone loony.

But the invaders get their message aired during a hockey game when they kill the sports announcer. This allows for the pilot’s corpse, the one they killed and substituted his lifeforce with theirs, to replace the announcer’s and deliver the threat to those watching the game. Delivering such a warning during a hockey game took my mind off the puck, but is that sporting event the proper world stage to deliver such a message! Perhaps, the director Edward L. Cahn thinks so in order to draw some laffs. The second warning takes place in LA, as buildings start getting destroyed. But none of the nations fold their cards.

America realizes this is for real as whole cities start getting destroyed. The invaders enlist a makeshift army of corpses to do their fighting. This stirs Penner to volunteer to start building weapons of mass destruction again and help the world become peaceful by killing its enemy. He’s taken to an underground A-bomb bunker under the protection of square jawed and humorless Major Bruce Jay (John Agar-one time hubby of Shirley Temple), where he’s asked to figure out a device to make these aliens visible. That’s the only way to kill them, as all other weapons have no effect. Meanwhile the countryside is filled with corpses of invaders hidden in them and attacking everyone else who isn’t dead or invisible. The invaders have turned the world’s own weapons on them in order to carry out their diabolical plan. I believe they don’t have weapons since they have no pockets to carry them!!!

The major kills without hesitation a crazed farmer, who won’t get out of the way of the jeep taking the science team to the bunker to work on saving the world. This killing turns Phyllis off, but after the kill the major says something sexy to her and meanwhile John has turned into a sniveling coward. So what’s an attractive girl in the 1950s supposed to do while her dad is only focused on building his detecting device, but fall for the macho major and give him some good eye contact. By accident the professor finds out that it’s ultrasonic sound that not only makes the invisible invaders visible, but destroys them.

This is a classic in bad sci-fi B-movies. Highly recommended for those who understand that a film doesn’t have to be good to be enjoyable. I mainly liked it for invisible reasons and for its banal dialogue delivered in robotic tones! 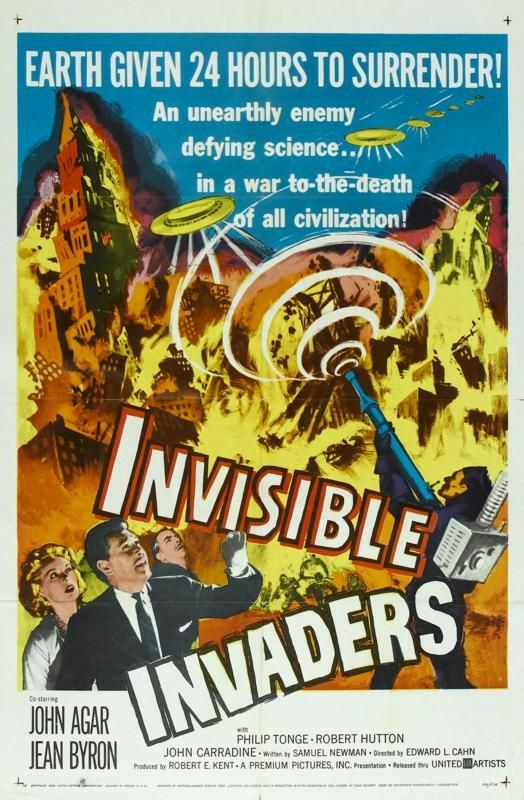