ANATOMY OF A MURDER

“Otto at the top of his game.”

Otto Preminger’s (“Laura”) brilliant courtroom drama is based on the best-selling novel by Robert Traver (Michigan Supreme Court justice John D. Voelker). It also includes an appropriate Duke Ellington jazz score. Wendell Mayes provides the well-written tight screenplay. Preminger shoots for a highly detailed trial that takes up practically the entire 161 minutes of the film, and is cynical if the system works as it probes trial procedures. It caused controversy at the time because it introduced ‘daring’ words (like panties and contraceptives) and concepts (like the never before used ‘sexual penetration’ for rape) into the trial, but that pales besides Preminger’s real aim in showing how justice can be manipulated. The trial judge Weaver, a visitor from downstate, was superbly played by real-life Boston trial judge Joseph Welch (he represented the army as a lawyer against Senator McCarthy in 1954 before becoming a judge).

Paul Biegler (James Stewart) is a bachelor, small-town lawyer in rural upstate Michigan, who is disappointed he lost in a recent election his prosecutor’s job to someone he considers inferior, Mitch Lodwick (Brooks West), after giving his all in serving his Thunder Bay community for the last ten years. His first client is surly, brutish, shrewd army Lieutenant Frederick Manion (Ben Gazzara), who killed an ex-boxer bar/restaurant owner Barney Quill after he raped and beat up his gorgeous wife Laura Manion (Lee Remick) near her trailer camp. Her character is questionable as she at times acts like a slut and other times as the good wife, while hubby has anger management problems over his jealousy. Biegler is aided by his sarcastic wisecracking loyal secretary Maida Rutledge (Eve Arden) and elderly mentor has-been lawyer Parnell Emmett McCarthy (Arthur O’Connell), who promises to keep off the sauce. The DA is aided by the smooth big-city Asst. State Atty. Gen. Claude Dancer (George C. Scott).

Army shrink Dr. Matthew Smith (Orson Bean) gives expert testimony that the soldier because of something called an ‘irresistible impulse’ committed murder, which allows the defense to cop a temporarily insanity plea even though the murder, which no one disputes the soldier committed, took place an hour after the rape. What ensues are a diverse group of characters called to the witness stand, including to the surprise of the DA’s team the bar owner’s daughter (Kathryn Grant), previously thought to be his mistress; a convict (Don Ross) with damning testimony against the accused; Quill’s close-mouthed bartender (Murray Hamilton); the caretaker on the grounds where the rape took place (Russ Brown); and a coached by the prosecutor’s detective (Ken Lynch). By the trial’s end there’s an uncertainty as to guilt or motive, as the jury could decide either way and not be faulted. Interest is sustained throughout, as the acting is first-class (especially by Stewart) and the smart dialogue resounds in the courtroom as the defense and prosecutors use words as dueling weapons. It’s Otto at the top of his game; perhaps his most accomplished film. 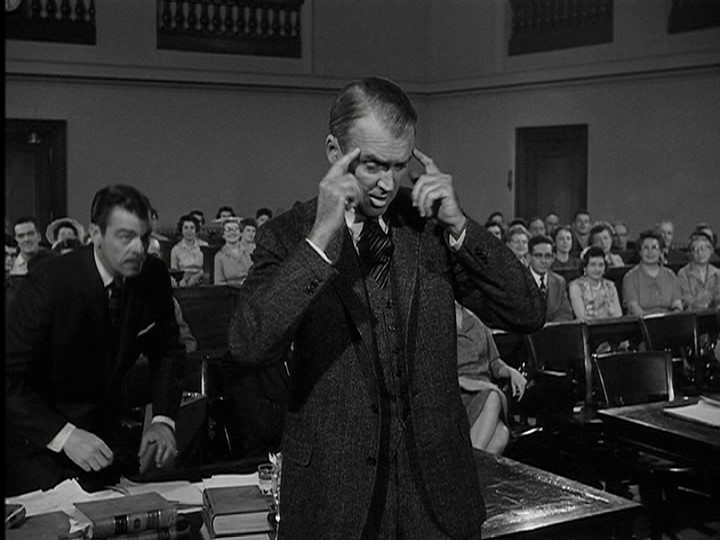