AN ACTOR’S REVENGE (aka: REVENGE OF A KABUKI ACTOR) (aka: YUKINOJO HENGE)

“The stunningly handsome period film is one of the best to come out of Japan–a masterpiece.”

Kazuo Hasegawa stars in drag as a 19th century female impersonator (onnagata) in a traveling Kabuki theatre troupe (no women in the troupe), a part he played less than thirty years ago. Teinosuke Kinugasa, a former onnagata, who wrote the screenplay for the 1963 version, also was the director-writer in the original 1935 film–also entitled An Actor’s Revenge. It was based on a banal pulp newspaper serialized melodrama by Otokichi Mikami and featured Hasegawa in the same parts. The remake was made to celebrate the 300th film appearance of box-office superstar Hasegawa, and the outstanding acting and directing in the 1963 film turned an original mediocre film miraculously into a work of art. The brilliant actor has a dual role, playing the revenge-minded fluttery impersonator Yukinojo Nakamura and the wanted burly thief Yamitaro. The great Kon Ichikawa (“The Burmese Harp”/”47 Ronin”/”Fires on the Plain”) superbly directs it as a highly stylized visually delightful revenge film (using the Daieiscope screen to create the look of Japanese prints, the theatre and comic strips) that blends together ritualized Kabuki theatre with action, gallows-humor and daring swordplay adventure.

Some twenty years ago three greedy merchants from Nagasaki, Hiromi-ya (Eijirô Yanagi), Sansai Dobe (Ganjiro Nakamura), Kawaguchi-ya (Saburo Date), conspired to ruin another merchant. It caused the suicides of Kabuki actor Yukinojo Nakamura’s ruined mother and father, and he has sworn to avenge the death of his parents. While performing in Edo, where the three wealthy men now reside, Yukinojo begins his intricate plot of revenge to get each to betray each other as the actor remains in drag and in character. There’s a subplot of both a pretty thief (Fujiko Yamamoto) and the pretty sweet concubine (Ayako Wakao) of the powerful shogun Sansai Dobe and the daughter of Kawaguchi-ya, falling in love with the determined assassin. This results in tragedy and in exposing overwhelming human emotion.

The stunningly handsome period film is one of the best to come out of Japan–a masterpiece. 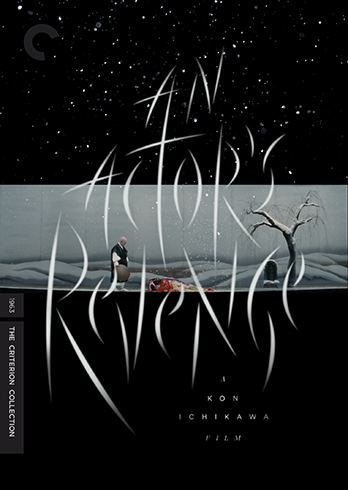