“Never won me over with its puzzling gamer storyline and its overlong two-and-a-half hours length.”

The fourth cinematic addition to the original Matrix (1999), originally presented as part of a trilogy, with its releases in 2003 of The Matrix Reloaded and The Matrix Revolutions. I found the new and unexpected Matrix of 2021 to be more unlikable than likeable, yet still a treat meant to pacify its fanbase over its sequels failures and to connect with a greater audience other than its usual suspects. Viewers if they stopped trying to cram for its usage of mythology as if taking a college final exam and instead just jumped down the white rabbit hole it invites you into, I think would get closer to what the film experience was meant to be. Nevertheless this version some eighteen years after the third version, never won me over with its puzzling gamer storyline and its overlong two-and-a-half hours length.

It’s directed solo by the Wachowski sibling Lana (“Cloud Atlas”/”Speed Racer”), who directed the others with her sister Lilly. If you liked the original, a testament to special effects, but hated the sequels because of their overindulgence with too many outlandish ideas, this one should remind you more of the more popular original, as it offers only a few new developments.

It opens with a reboot of the 1999 Matrix. Led by the female resistance squad leader from the real world, the cyber anarchist with punk-like purple hair, Bugs (Jessica Henwick), as she and her crew hack into an old memory document from the Matrix. The hacker, Trinity (Carie Anne Moss), already in the game and dressed in black leather, encounters Agent Smith and his men in black, and soon the Matrix game lovers (Neo & Trinity) are killed.

Neo (Keanu Reeves), perceived as the chosen one, the savior of humanity, who appeared to sacrifice himself at the end of film three, is magically back in the digital simulation now, and after a suicide attempt is living again as the twenty years older Thomas Anderson. Anderson has become a successful video game genius designer whose greatest creation was a trilogy of hit games called The Matrix, who is now designing a new game called Binary under pressure from his corporate bosses to keep inventing money making games. A part of Anderson knows these games are a story he actually lived, but he has allowed the boobs around him to convince him he’s mentally ill: whereby he’s treated by an unnamed stern analyst (Neil Patrick Harris) with blue pills (which are prescriptions for being contented with ignorance, instead of the red pills which are taken for bringing out the unresolved truths). The shrink also helps talk him through the violent episodes in which he imagines the whole world is a simulated reality he needs to get away from. Anderson’s corporate sponsor is Warner Bothers and his disagreeable and demanding business partner in the everyday world is the untrustworthy and oily character named Smith (Jonathan Groff).

A highlight scene is how Anderson meets in a coffee shop Tiffany and they make a love connection (which becomes an important part of the film). Tiff reminds him of someone named Trinity, who was in the Matrix with him.

Also an important part of the story is the aging General Niobe (Jada Pickett Smith), the ruler headquartered in the underground city of Zion, who prepares for a war of liberation.

The filmmaker faults the critics of the sequels for not wanting to deal with its supposedly high-powered ideas yet in response only offers a sci-fi fantasy film with less visionary offerings than before and with lots of gun play, fighting sequences, and a gruesome bloody one of a throat being slit.

Nevertheless it’s a daring imaginative blockbuster sci-fi film that toys with our perceptions of reality and revolves around its hero Neo and his will to live for making a better society, even as he’s being plagued by strange memories and having to come to grips with himself after being back in the Matrix. In the Matrix, Neo must deal with a mysterious figure called both Agent Smith and Morpheus (Yahya Abdul-Mateen II), and has to deal with how mediocre the world has come because of all the bad guys.

Though I question the film’s execution as being off the mark, it does offer its fanbase a wild ride into its strange but visionary alternate universe. Perhaps with its tweaks of its past premises, it will be better perceived than it was after the release of the trilogy. 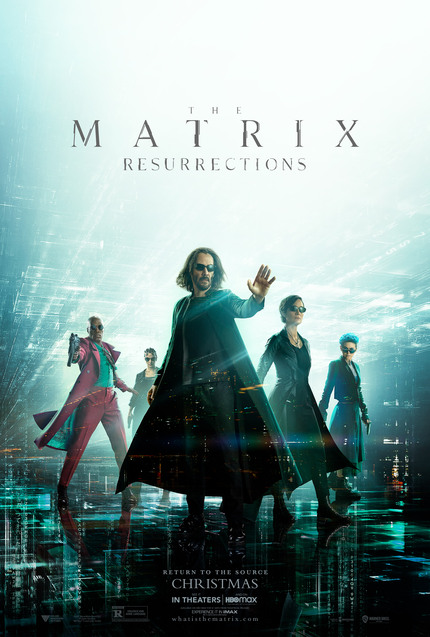 RETURN FROM THE ASHES