Top-notch lively John Wayne actioner. William A. Seiter directs in a straightforward manner; it’s based on the novel The First Rebel by Neil H. Swanson and written by P. J. Wolfson. It’s set in the Pennsylvania’s Conococheague Valley in 1759, sixteen years before the American Revolution when the settlers were under British rule. It brings together again John Wayne and Claire Trevor as co-stars after their triumph in Stagecoach, and again they show tremendous chemistry together.

John plays frontiersman James Smith. He and fellow settler known as the Professor escape from their Indian captors after three years and return to find a tyrannical strictly by-the-book British commander of their area fort, Captain Swanson (George Sanders). The biggest problem for the settlers is the Indian attacks. Now that the French are defeated in the so-called French and Indian wars, the Indian attacks continue because unscrupulous traders supply them with liquor and tomahawks. Governor Penn, leader of the Quaker commonwealth, signs a proclamation forbidding such trade, but the villainous Ralph Callendar (Brian Donlevy) corrupts some of the army personnel and sneaks the contraband in with the regular army trading goods. That he gets a military permit, stops the arrogant, obtuse and stubborn Swanson from searching the cargo. This upsets the settlers, who fear the weapons will lead to more Indian attacks. The settlers under James Smith dress up as Indians and raid Callendar’s supply caravan. This pits the British soldiers against the colonists, as the colonists are arrested and put on trial in violation of their rights.

Janie MacDougall (Claire Trevor) is the feisty tomboyish daughter of Smith’s good friend and ally, the hard drinking and fightin’ tavern owner Mac (Wilfred Lawson). She is stewing because she loves Smith and he won’t marry her or take her along on his raids, but that doesn’t stop Janie from following her man through thick and thin. It all leads to Smith’s gang of ragtag settlers, known as the “Black Boys,” smashing Callendar’s illicit trade with the Indians.

Besides the colorful characterizations, breezy pace and almost non-stop action, cinematographer Nick Musuraca does a marvelous job drawing out the feel of that volatile period with his expressionistic black-and-white photography.The film was released at the same time as Drums Along the Mohawk, which is set during the same time frame but proved to be received in a better light by the public. Allegheny Uprising had the misfortune of depicting the British in too much of an unfavorable light in 1939, this was shortly before they were to become America’s allies against the Nazis. But viewed today, the unpretentious film is a corker. 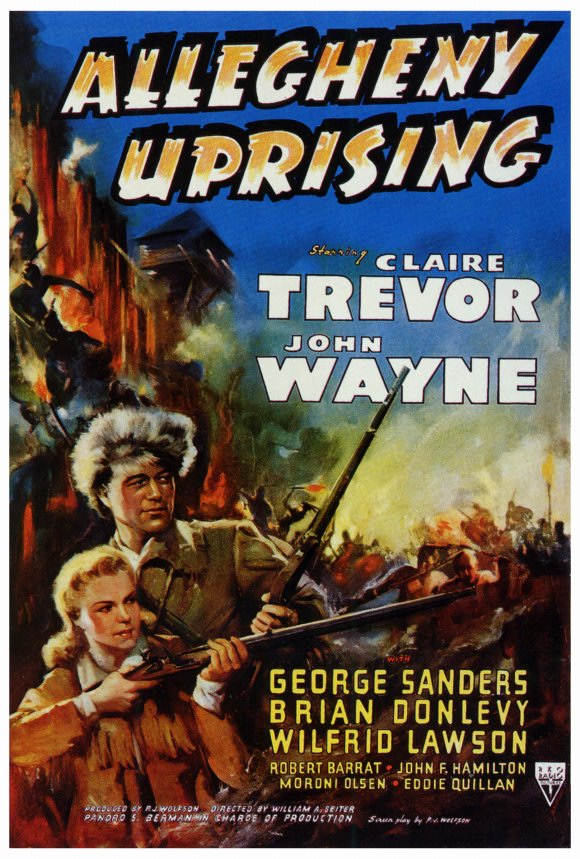