JESSE JAMES UNDER THE BLACK FLAG

“Becomes interesting only because it has an overweight middle-aged Jesse James Jr. playing his infamous bandit father.”

A rare film that is a re-issue version of the one from the 1930’s that has a documentary style narration and portends to tell the true story of Jesse James as told by his only son Jesse James Jr. Writer-director Franklin B. Coates (“The Captain Besley Expedition”) has written a book about Jesse James that casts the legendary bandit as an American Robin Hood figure, who got into crime because he was wronged by the federal troops, the home guard and the Pinkertons. The bad film, a whitewash of Jesse James’ foul deeds that instead makes him an heroic figure, is a curio that becomes interesting only because it has an overweight middle-aged Jesse James Jr. playing his infamous bandit father and how during the Civil War .

It opens with Franklin B. Coates discussing his book on Jesse James with his co-author Jesse James, Jr., in his Kansas City, Mo., estate. Junior’s daughter Lucille meets Eastern millionaire Robert Standing after he lands his plane in a nearby field and soon they plan to marry. Before agreeing to Robert’s proposal, Lucille has him read Coates’s book so that he will know the real Jesse. The film follows the outline of the book, beginning when Jesse was a boy on the family farm near Kearney, Missouri, and his beloved dad was murdered in his house and then when he joined Quantrill’s raiders in Missouri, before the Civil War began, after Union soldiers mistreated his family. He swore allegiance to their Black Flag (‘seeks no quarters and will give none’). At the Civil War’s end in 1865, the raiders who surrendered were all pardoned. Jesse, because he was severely wounded and couldn’t surrender with the other two hundred, didn’t receive a pardon. It then follows Jesse being feted in a party by Judge Bowman and meeting his future wife Zee Mims at the reception. Hoping to live a peaceful life with his wife and two children, he becomes an outlaw when he’s falsely accused of a bank robbery in his hometown by the home guard and flees vowing to adhere to “an eye for an eye” credo. It shows a re-enactment of the botched Northfield Minnesota bank and the gunning down by a posse of the Younger brothers–former Quantrill guerrillas and James gang members. Finally it shows the cowardly Ford brothers plotting to kill Jesse for the reward and Bob Ford shooting Jesse in the back, with the pearl-handled gun Jesse gave him as a gift, while he’s straightening out a picture in his St. Joseph’s cottage. 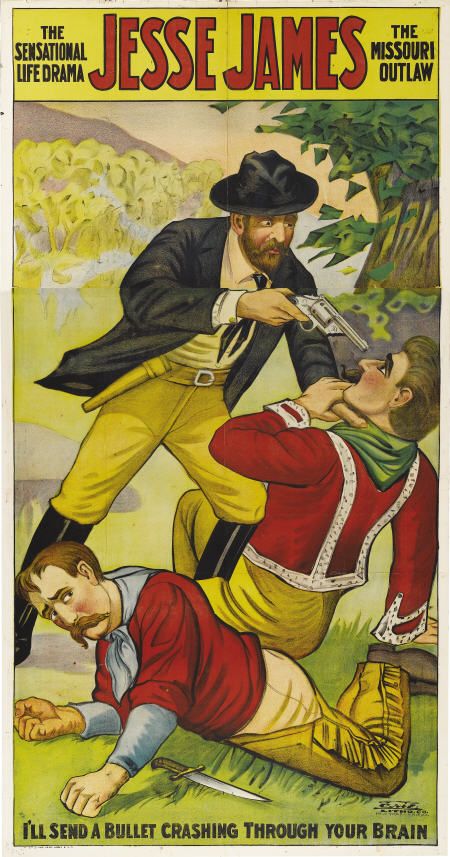