“A chilling tale about bias.“

Rainer Werner Fassbinder takes the outcast theme from Douglas Sirk’s Hollywood melodrama All That Heaven Allows and pushes forth a disarmingly simple tale of the ill-fated love and improbable affair between an unattractive 60-year-old cleaning woman named Emmi Kurowski (Brigitte Mira) and a black Moroccan immigrant auto mechanic in his late thirties, who is given the generic name of Ali because his real name is too long (El Hedi ben Salem-the real-life lover of Fassbinder). Their quick romance and marriage acts to expose the racial prejudice and moral hypocrisy that infects modern West Germany. The dramatization goes to extremes, in mannered performances, to show in set pieces how everyday events are filled with racist attitudes and clashes of cultures.

Attracted to the foreign music from the jukebox and looking for a place to get out of the rain, Emmi enters the bar populated by Arabic patrons and orders a Coke at a table near the door. One of the regulars is the strapping, black bearded Ali, who asks Emmi to dance when spurred on by the blonde barmaid and the busty young woman patron he just rejected. The patrons look upon the elderly woman with a contempt reserved for strangers, in other words their glares of hatred reflect how on the outside Germans look at Arabs. But to the barmaid’s surprise, the two lonely strangers hit it off and retreat to Emmi’s place where he’s invited to stay the night. They move in together and quietly face the racial slurs of their neighbors in her apartment building, which affects her greatly but is something Ali is used to. The landlord’s son (Bohm) reacting to the neighbor’s complaints asks her to give up her lodger, since her lease doesn’t allow for sublets. When she fends the landlord off by saying they plan to marry, he yields. Ali thinks it’s a good idea and agrees to the marriage–hoping their loneliness will now be cured. The most shocking scene is when the widowed Emmi, who married a Polish worker against her Hitler loving father’s approval, invites her three married children over to meet her black husband and they openly reject him. Bruno (Gauhe) kicks in her TV set in anger, while Albert declares she must have lost her marbles, and daughter Krista tells her extremely bigoted husband Eugen (Fassbinder) to let’s get out of the pigsty immediately. The way those who knew and accepted the half Polish and German woman before suddenly changes with her marriage to the foreigner, as now the gossipy neighbors explain her radical behavior by saying she’s not really German and treat her with contempt. The corner grocery store refuses to serve her on the pretext Ali doesn’t speak a proper German, her once friendly neighbors complain the building is now filthy, and the close relationship she had with her fellow cleaning ladies becomes strained. Dining out with Ali to celebrate their marriage in a luxury restaurant with the reputation as one of Hitler’s favorite in Munich, she’s treated as an inferior by the distant waiter and made to feel out of place.

After a long vacation together to ease the stress, the social ostracism changes on their return because the bigots have reasons to now be accommodating. The grocer wants her business again, one of the neighbors needs her large cellar space for storage, and Bruno apologizes because he needs her to baby-sit. When Ali doesn’t get his couscous one evening he seeks out his former lady friend, the local buxom bar owner, and stays with her for the night. The next day Emmi returns to the local bar and while dancing with Ali to the same Black Gypsy song they danced to when they first met she forgives his infidelities and suggests that they reunite and be nice to each other when together to ease their pain, but just as she finishes saying that he collapses in her arms from a burst stomach ulcer. At the hospital Emmi’s told by a doctor that he will recover but every six months the ulcer will come back, as it does with all the Arab foreigners, due to the stress of living away from home.

Fassbinder breaks more taboos than Sirk’s similarly plotted fable, where it was only about age and class difference. This low-budget melodrama was shot in a mere 15 days and was made as a small throwaway film, nevertheless it gained for Fassbinder a good reputation through the years as it made him more known to international audiences and became one of the key films of the New German Cinema. It was the winner of the International Critics’ Prize at the 1974 Cannes Film Festival.

The photography of bright colors is much like that used in All That Heaven Allows, but Fassbinder shows his natural pessimism by the many framed shots of Ali and Emmi closed off as if they were behind prison bars unable to become free of racism that’s both in their head and in society. The overall effect is a chilling tale about bias and how those in the minority and who are somehow different are made to feel inferior by the majority. 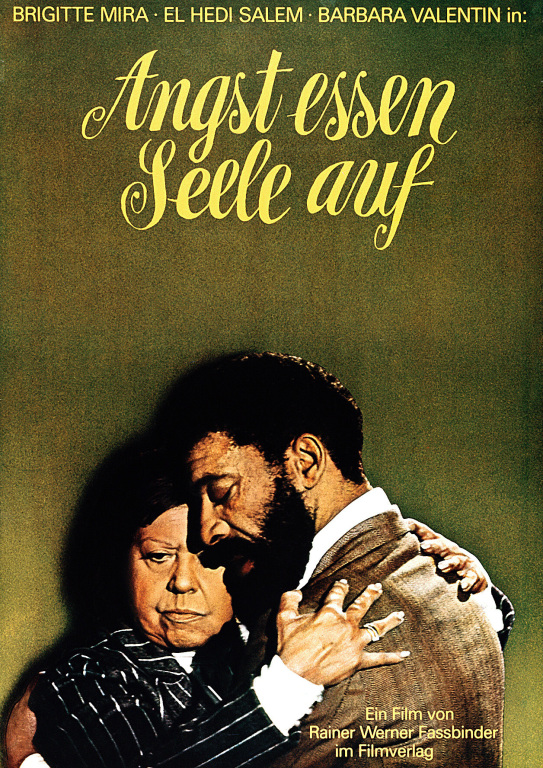