Created by the innovative Russian artistic legendary filmmaker, Sergei Eisenstein(“Battleship Potemkin”/”Ivan the Terrible”/”October”), as a splendidly moving historical propaganda film about Russia’s warrior spirit as it ties Russia’s past and present together through the expression of patriotism. It’s set in the 13th century, at a time Russia is being invaded by outsiders. The heroic, pious and primitively innocent Russian prince Alexander Nevsky (Nikolai Cherkasov) defeats the invading Swedes and becomes a national hero. He also deters the Mongol hordes from invading because of his legendary battle skills. Then the Prince unites the common people of Novgorod to fight the sinister German invaders. In the spring of 1242, Nevsky with the help of brave field commanders Vasili (Nikolai Okhlopkov) and Gavrilo (Andrei Abrikosov) attacks the Germans and in a bloody massive Battle on the Ice, at Lake Peipus, routs the Germans and captures their leader, who said there can be only one Roman Emperor, the Grand Master of the Teutonic Order (V. Yershov). At a victory celebration the Prince orders the Grand Master to be hanged, decides to ransom the captured knights and allows the mob to tear apart the captured traitorous mayor of Pskov (Sergei Blinnikov). The subplot has the pretty maiden from Novgorod, Olga (Vera Ivacheva), accepting the marriage proposal of one of the wounded hero field commanders who went first into battle. It concludes with the Prince warning if you come to Russia with a sword in your hand, you will die by the sword. But those that come as friends will be treated as friends.

Aided by the stirring music of Sergei Prokofiev, the charismatic performance by Cherkasov, as the ideal brave knight and savior of his country, and the spectacular battle scenes, it results in a timeless historical epic and as a homage to the spirit of humanity to fight as one for their freedom. But there are drawbacks– it’s a stagey theatrical film that has some stilted moments and the story is at times turgid.

The classic film was withdrawn by Stalin from being released when completed in 1938 because of the signing of the German-Soviet Pact, but when the Nazis a year and a half later broke the treaty and invaded Russia the film was released and was very popular in the USSR. 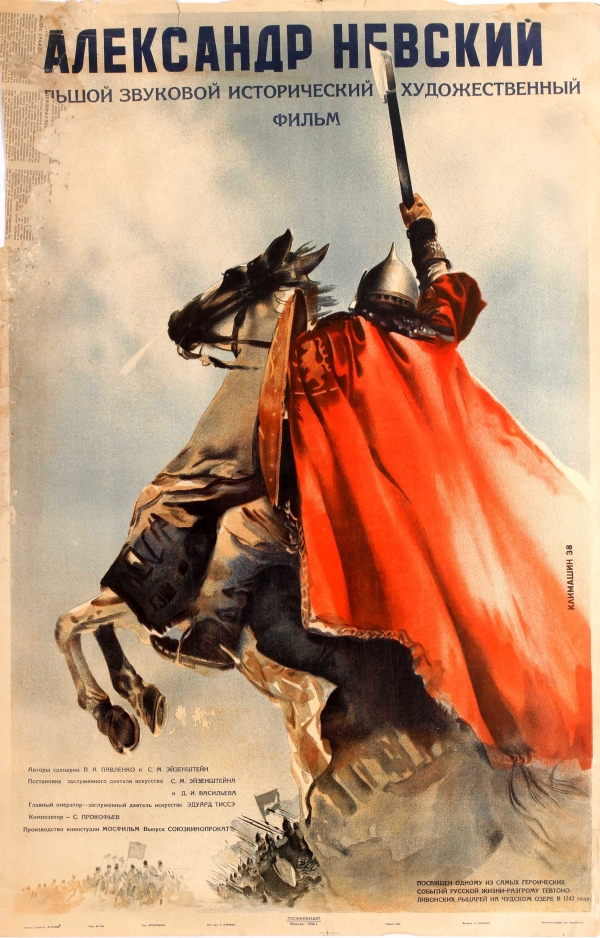