A LADY TAKES A CHANCE

“A lightweight romantic comedy that’s pleasing because of the easygoing relationship between stars Jean Arthur and John Wayne.”

A lightweight romantic comedy that’s pleasing because of the easygoing relationship between stars Jean Arthur and John Wayne. It’s directed by William A. Seiter (former Keystone Kop) and penned by Robert Ardrey from a story by Jo Swerling. It was RKO’s third highest grosser of the year, but never received credit as one of Wayne’s better or more well known films. It was produced by Arthur’s then-husband Frank Ross.

The film opens with this crawl: “Once upon a timeIt was so long ago that people drove sixty miles an hour and skidded their tires, and drank three cups of coffee all at once, and ate big gobs of butter, and there were more fellows around than there were girls, and everyone was having a good time without knowing it. That’s when our story happened. Away back thenin 1938.” It then shows naive Manhattan office worker Molly J. Truesdale (Jean Arthur) saying adios to three persistent but unlikely suitors (Grant Withers, Hans Conried and Grady Sutton) as she boards a tour bus run by Smiley Lambert (Phil Silvers) for a 14-day tour of the west. The advertisement for the tour says “14 breathless days of romance and adventure.”

Attending a rodeo in Oregon Molly meets contestant Duke Hudkins (John Wayne) when he’s thrown from his bucking bronco onto her lap while she watches in the stands. They soon begin a romance where east meets west; at least, they both try to overcome their cultural differences. The Duke shows the easterner how the men court women out west (gambling, boozing and fighting), and it results in Molly missing her tour-bus. Molly accepts an offer to sleep overnight in the hotel room shared by Duke and his comical sidekick Waco (Charles Winninger), and plans to go tomorrow with Duke to Gold City to catch up with her tour bus for the return trip home. But Duke makes some amorous moves after trying to get her drunk and she becomes upset with him. She refuses his offer of a ride and instead tries hitching to Gold City, but relents to accept a ride with him when left stranded in the sticks. In Gold City, she now believes she’s in love with Duke despite him showing more concern about his horse and not getting hooked into marriage. To try and change his mind, she prepares him a home-cooked meal of lamb chops. This only makes him more wary of being trapped into a marriage and she takes the bus home alone. But, as expected, Duke realizes this is the gal for him and heads for NYC to deliver his love message in person. 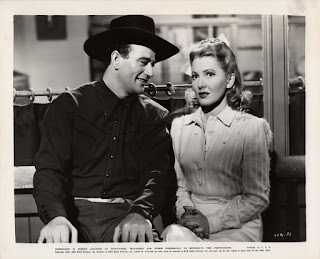 NO FEAR, NO DIE