ADVENTURES OF ROBIN HOOD, THE

“One of the best swashbucklers ever.“

Codirectors Michael Curtiz (“Casablanca”) and William Keighley (“The Fighting 69th”) direct one of the best swashbucklers ever. The original director,Keighley, was replaced by Curtiz because he was taking too long to finish the pic–causing budget problems. The screenplay is by Norman Reilly Raine and Seton I. Miller, based on the Robin Hood legend that’s set in 12th-century England. Errol Flynn is at the top of his game, dashing, handsome and athletic, as this might be his best role ever. Eric Wolfgang Korngold’ score is rousing and memorable. The color photography is lush and easy on the eyes. It follows the silent 1922 version that starred Douglas Fairbanks Sr., and uses different action scenes to avoid a law suit over copyrights owned by Fairbanks.

When King Richard the Lion-Heart (Ian Hunter), who left England to fight in the Crusades, returns to Europe, he’s taken captive and held for ransom in Austria. Which prompts his evil brother, the Norman Prince John (Claude Rains), to unlawfully seize control of the kingdom. The unscrupulous John pretends to collect high taxes from the Saxons for his brother, but instead plans on using it to build an army to retain the throne for himself. His enforcers are Sir Guy of Gisbourne (Basil Rathbone) and the Sheriff of Nottingham (Melville Cooper), who begin a reign of terror on the Saxons that sees them tortured, killed, oppressed and their homes destroyed. Sir Robin of Locksley (Errol Flynn) protects the poor Saxons and in turn becomes a wanted outlaw, who goes by the name of Robin Hood. Together with his Merry Pranksters of Sherwood Forest, Robin leads the revolt against Prince John and is helped by commoners Will Scarlett (Patric Knowles), Little John (Alan Hale) and Friar Tuck (Eugene Pallette). Robin also woos the Norman beauty Maid Marian (Olivia de Havilland), who sees for herself that he sincerely cares about justice and falls in love with the outlaw. Marian aids Robin when he’s captured in a trap set by Prince John at an archery contest, as she tells Robin’s men where he’s imprisoned so they can free him from the gallows.

King Richard is released when the ransom is paid by Robin’s men and asks Robin to help him unseat his evil brother from the throne. It leads to the climactic attack by Robin’s men at the sneering John’s coronation, as the attackers appear from under monks’ robes to surprise John’s knights. It ends with a spectacular sword fight between Gisbourne and Robin, and the restoration of Richard to his rightful throne. John is banished and Robin and Marian have Richard’s permission to marry.

Makes for a great escapist Saturday matinee feature, which was the popular time slot back in the day for such an adventure story. 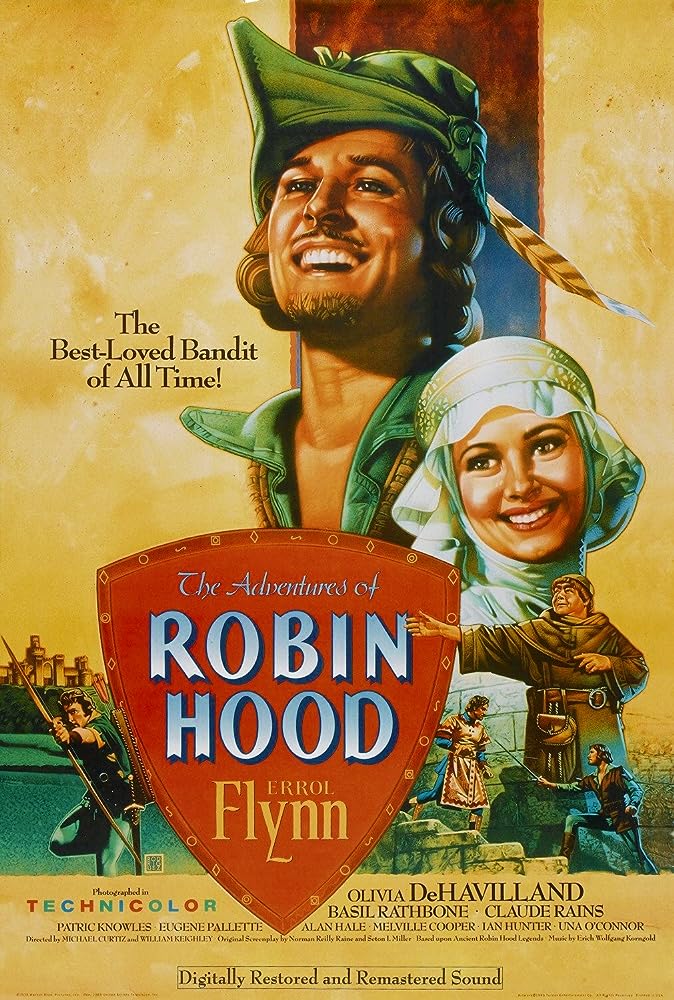