ACROSS THE WIDE MISSOURI

“A savagely cut film by MGM studio boss Dore Schary who does his best to try and ruin it.”

A savagely cut film by MGM studio boss Dore Schary who does his best to try and ruin it. But the film, by director William A. Wellman (“Wings”/”The Public Enemy”/ “Battleground”), is so strong it overcomes even that, though it fails to become the epic it should have become. Wellman was so sore at the cuts, that he wanted his name removed from the film. It’s based on a story by Talbot Jennings and Frank Cavett, which was inspired by the book by Bernard DeVoto–a lengthy and detailed historical study of the American fur trade from 1832 to 1838. It’s written by Talbot Jennings.

It’s set in the Colorado Territory of the 1820s (filmed on location in Durango, Colorado), where wily, unschooled and two-fisted mountain man and fur trapper Flint Mitchell (Clark Gable) plans to hunt in Blackfoot Territory without permission. In a mercenary marriage of convenience, Flint uses his horses to buy a Blackfoot squaw, Kamiah (Maria Elena Marques), from Looking Glass (J. Carrol Naish), the Nez Perce chief. Kamiah just happens to be the granddaughter of the Blackfoot chief Bear Ghost (Jack Holt), and her influence with the chief allows the Flint brigade of 150 pioneers to get permission to hunt for beaver in their turf. All is rosy out in the rugged Rocky Mountain terrain until a crazed trapper, Roy DuNord, in revenge for a Blackfoot killing his brother, kills the Blackfoot chief. His place is taken by Ironshirt (Ricardo Montalban), who is Flint’s enemy and wants all the trappers to leave the Blackfoot Territory. In retaliation, Ironshirt attacks the trappers and kills Kamiah. But Flint, who by this time finds he really loves his wife, goes after Ironshirt and kills him and at the same time saves his baby son Chip who is strapped onto a runaway horse. After a few years pass, Flint delivers his son to the now friendly again Blackfoot to raise him while he hunts. Chip (Howard Keel) acts as narrator (something Schary tacked on after the film was shot) and relates the heroic story of his father and tells how he was a genuine American pioneer who paved the way for settlers to go west.

Adolphe Menjou plays a French trader who translates for Flint when he meets with the Indians. John Hodiak plays a Scotsman who goes native and lives with the Blackfoot. Alan Napier is a kilt wearing Scotsman who is one of the colorful trappers.

Due to the poor editing the production is choppy and seems incomplete, and the full-blown story never kicks in. But the lush scenery is stunningly captured by photographer William Mellor, giving Colorado the look of an unspoiled paradise. Of course, this heavenly spot is threatened by the white man’s greed for fur and the film alternates between waxing poetic about the majestic landscape and showing how the white men in order to survive came to terms with the Indian ways. 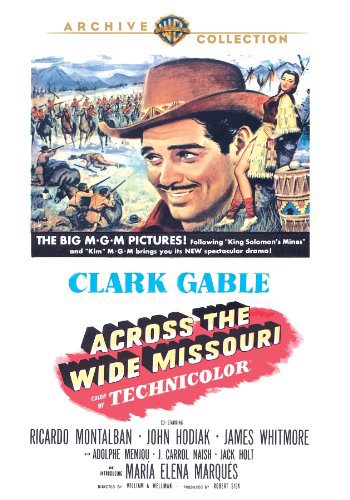