“This do not take-me-serious B-film is played as a limp tribute to the 1950s mutant bug films such as Them!.”

This do not take-me-serious B-film is played as a limp tribute to the 1950s mutant bug films such as Them!. It is set in a rundown Arizona mining town ironically called Prosperity, whose few attractions include a mall that attracts few shoppers, an abandoned mine with the possibility of gold, a spider farm, and a diner that serves ostrich burgers. The plotline develops from a chemical spill of toxic wastes that causes spiders to become as big as corporate greed. The first-time director from New Zealand, Ellory Elkayem, gets a little too buggy in his attempt to keep everything nice and dumb, as the film does not break its treasured oath to the keepers of schlock horror films by bringing any wit or class into the story. Instead of playing this drive-in cheapie for scares, it’s played strictly for laffs. The comedy is supposed to be camp (at least I detected such an attempt), and it is supposed to come about from the eccentric townies doing their feebly scripted one-dimensional embarrassing thing. They never veer an inch from how they were first cast in stone. Needless to say the humor is childish, the story inane, and the actors appear desperate to find their own way in what seems like familiar scenes stolen from many a horror flick. There’s not much that’s original except for the excellent special effects. The film strains so hard to be so cute funny, that it should check itself into the editing room for a possible reel-to-reel hernia.

The prodigal son, Chris McCormick (David Arquette), of the owner of the town’s failed gold mine, who recently died, arrives back in his hometown after a ten year hiatus to revive the mine and his romance with the town’s divorced piece of ass, Sheriff Sam Parker (Kari Wuhrer). At the same time, a truck driver wishing to avert a rabbit on the road to Prosperity, overturns and his drum-loads of toxic wastes spill into the river. The film’s most accomplished actor, Tom Noonan, is stuck in a throwaway cameo, as he plays Joshua Taft the owner of a spider farm who has in his possession over a hundred rare and exotic arachnids—-jumpers, trap-doors, and tarantulas. They are starting to become unusually large, which makes Taft as proud as a new father handing out cigars in a pro-life rally. The sheriff’s nerdy, bespectacled, book learning young son, Mike (Scott Terra), has shown an interest in Taft’s spiders and visits him once a week to check out his collection and sate his curiosity. When he leaves Taft, a spider who got loose from the glass case attacks the weirdo spider man. All the other spiders escape. They are already contaminated because they were fed bugs tainted with the river toxins, as they head to their hideout in the mine (the spiders seem to know their way around town better than the locals). Noonan’s loss is great at such an early stage in the film, because without him the only ones left who can act their parts without looking like asses are the spiders.

At night these huge CGI spiders come out to attack the locals, but the film is not clear how they kill their human prey (Why be concerned with such minor details!). When they wish to keep them alive for future use they spin a cocoon around them, which is the highlight or lowlight of the film. It all depends on how receptive you are to bad films. I realize certain film buffs find all this kitsch very appealing, and all I can say is God bless them. Though, I think, this film works best if you expect nothing. After all, that’s what you’re going to get, anyhow.

The town consists of the following characters: a crooked mayor, Wade (Leon Rippy), who has a lucrative secret private deal going where he stores toxic wastes in the abandoned mine shafts without ever getting the town’s permission and who is now trying to get every unsuspecting landowner to sell out to his silent partner waste toxic company in another of his get-rich-quick schemes; a paranoid black man named Harlan (Doug E. Doug-rapper), who runs a kooky radio program out of his mobile home and rants about assorted conspiracy theories and alien invasions — claiming the government knows about alien visitors but keeps it hidden; the sheriff’s cartoonish goofy deputy, Pete (Rick Overton), who turns every line thrown his way into a dumb stare; a grumpy chain-smoking rep for the abandoned mine, who might be a relative of Chris’, Gladys (Eileen Ryan), who is given no lines for her comedy so she has to make her own comedy by looking silly when found spun in a spider’s web; and the mayor’s dopey, can’t-get-laid but don’t blame me for my stupid moves, dirt bike-riding son, Bret (Matt Czuchry), who is trying his obnoxious hardest to ball the bitchy cock-teasing sheriff’s teenage daughter, Ashley (Scarlett Johansson).

Mike is the only one in town who knows about the spiders and what they are up to. The horror film cliché is made light of — “nobody ever listens to the kid;” that is, until they see for themselves and are forced to band together to ward off the mutant spiders.

Despite some good F/X shots of spiders leapfrogging around town while attacking (these shot are repeated throughout until they wear out their welcome), the film is too blah to be anything but awkward in everything it attempts. If there was something more unfunny than the comedy and the unsightly sight gags, that was the attempt to show a romance between the tongue-tied Chris and the self-assured Sam who only needs a faithful stud in her life to continue on with her no-nonsense macho existence. There were no sex scenes, just plenty of shots indicating that even in her cop outfit you can easily see she has big boobs. All the quality screentime was given to the bugs on the prowl, which leads up to the final showdown in the nonviable mall between the crazed spiders and the learning on-the-run proletarians. That scene ended as foolishly full of gas as it begun (Anyhow, didn’t Romero shoot that scene in his “Dawn of the Dead“?). The ones who would shamelessly bring such dreck out as a feature film (it was first shot as a short) are Dean Devlin (producer of “Godzilla“) and Roland Emmerich. They hand-picked Elkayem to direct his original short into a feature film and make them some dough, and the result is a spoof that is creepy and unimaginative. 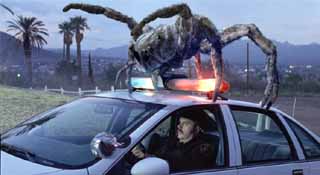 MAN IN THE DARK