YEAR OF THE DOG

“A surprisingly realistic but offbeat touching story that is both funny and sad.”

Writer-director Mike White, in his debut as a director, helms a quirky, smart and poignant comedy that is just as much a serious drama about the human condition. Its awkward suburban middle-aged heroine, Peggy (Molly Shannon), loves her pet beagle Pencil more than anything else in the world. The unremarkable Peggy works as an administrative assistant (basically a fancy name for a secretary) in a large business firm, where she wows her self-absorbed dullish boss Robin (Josh Pais) by fully listening to his gripes about his superiors, pleases the other office workers the same way, especially her closest and most supportive friend Layla (Regina King), who is an earthy chick aiming to marry her womanizing coworker Don (Dale Godboldo), and does the same good listening trick with her family-minded plain vanilla brother Pier (Tom McCarthy) and her high-strung sister-in-law Bret (Laura Dern) who is overprotective of her toddlers.

Tragedy hits home when Peggy’s dog mysteriously swallows toxic poison and dies. The lonely, single woman falls to pieces when she loses the love of her life. She has a horrible date with her friendly but blunt next door neighbor Al (John C. Reilly), an avid hunter and knife collector, whom she thinks accidentally left poison out in his garage that Pencil ate. Then Peggy becomes enamored with a fellow animal lover Newt (Peter Sarsgaard), who gets her to adopt a dog with behavior problems before he’s put down. This dog, a German shepherd named Valentine, is no Pencil and has to undergo obedience training by animal lover Newt. Molly thinks she has found the sensitive man she’s always been looking for and even is converted by him into being a vegan, but fails to pick up hints that he’s not interested in women because he’s gay. Things go ballistic when Valentine mauls to death the crippled pooch Newt adopted and is put down by the pound at his request. By now Peggy is a full-fledged animal activist and maneuvers to adopt fifteen dogs from the pound who are about to be put down. Her behavior becomes so erratic that she cannot function in the same environment in the way she did before, as she becomes a pushy self-righteous crusading activist who gets fired and gets under the skin of all those who were close to her. She goes from being a sympathetic figure to one whom we question her sanity, but the beauty in the film is the way things are resolved where she can find a way to be herself and live without the anxiety of offending others. The daffy protagonist manages to win back our sympathy, as she takes steps to live out her new life experiences in a way that makes sense to her. Even though she might not be a person we can love without reservations, she’s dignified her life with a certain grace.

It thankfully veers away from sentimental mainstream sitcom, shuns going for easy laughs at the expense of the vulnerable, loopy, lost soul protagonist and leaves us with a surprisingly realistic but offbeat touching story that is both funny and sad. By the closing scene, Peggy realizes that in life there are “so many things to love” and she should not be afraid of that, even if it means she finds more empathy with animals than people. She might not always be right or make the best decisions, but her love for the animals is unconditional just like Pencil’s love for her was unconditional 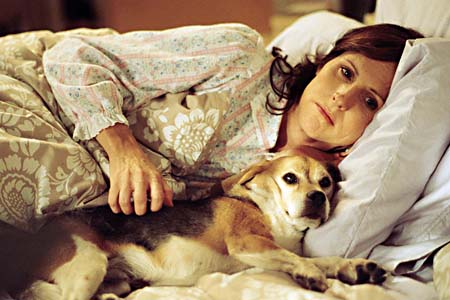