“Ho-hum, another $200 million blockbuster ‘disaster’ movie about saving the world.”

Ho-hum, another $200 million blockbuster ‘disaster’ movie about saving the world. This time the danger is from rampaging zombies (computer generated) in every part of the world, as a contagious virus transforms people into raging homicidal maniacs when they come into contact with the carrier. Director Marc Foster(“The Kite Runner”/”Quantum of Solace”/”Machine Gun Preacher”) shuns camp and humor to keep the apocalypse scenario dead serious or should I say sprinting dead serious. It’s based on the 2006 novel by Max Brooks (yeah, Mel’s son).

Gerry Lane (Brad Pitt) is a former United Nations troubleshooter suddenly faced with a global zombie invasion while stuck in a Philadelphia traffic jam with his loving wife (Mireille Enos) and two young daughters (Sterling Jerins & Abigail Hargrove). The undead invaders have nearly taken over the world and there are not many safe spots to flee to, but through Gerry’s former job connections with his former boss (Fana Mokoena) his brood are brought by helicopter from the roof of a Newark building to safety on a U.N. command center aircraft carrier, based in the Atlantic. If Gerry refuses to help the U.N. command to go on a dangerous mission into the world’s battle zones tosearch for the virus’s origin and cure, Gerry’s told he and his family will not be allowed to stay there. Gerry accepts the mission and sees action in places like South Korea and Jerusalem and Wales, as he eventually figures out a way to use a vaccine to defeat the zombies.

What I learned from the unambitious, snore inducing and hardly original film, is to always expect the unexpected, to always be prepared, and that usually goofy disaster pics (like Zombieland-2009) are more fun watches than the ones that try to be so serious. 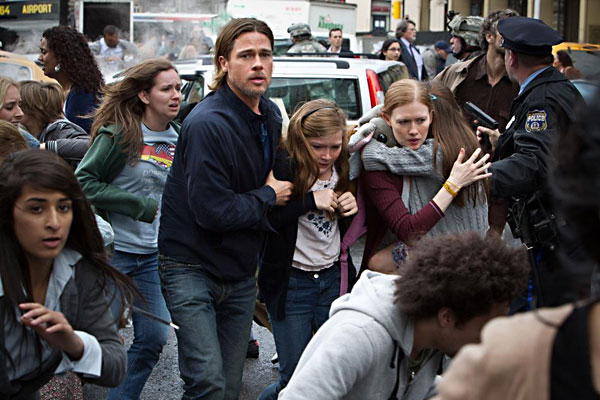