“… opts for a discreet, quiet and dignified way to show the tragedy and to take away from it something that was uplifting.”

Controversial writer-director Oliver Stone’s (“JFK”/”Platoon”) World Trade Center brings no controversy, no conspiracy theories or political agenda in his restrained and moving fact-based take on that infamous day in American history on September 11, 2001. It’s filmed in an old-fashioned Hollywood conventional style that’s set to deliver the heroics and emotions in the usual blockbuster disaster film style. But what’s different is that Stone and co-writer Andrea Berloff (wrote the original screenplay) are providing an historical record by relating a recent event that all Americans experienced through the media and the filmmakers give the full impact of how the tragedy brought about something that was inspirational for all Americans and something they can be proud of because it really happened. The heroes are the real-deal; those grieving shed real tears. The incredulous story doesn’t have to be expanded beyond the tremendous impact it had on this country and throughout the world, and to Stone’s credit he doesn’t. Just by not showing the shots of the planes hitting the Twin Towers that were repeatedly aired on TV, Stone shows that the re-creation historical film aims higher than being an exploitation film. Stone, instead, opts for a discreet, quiet and dignified way to show the tragedy and to take away from it something that was uplifting–which is not the usual way he operates. He does it by turning his attention to the story of two of New York City’s Port Authority police officers, the down-to-earth Sergeant John McLoughlin (Nicolas Cage) and the young selfless officer William J. Jimeno (Michael Pena), who will become linked together because of that tragic day. John, a twenty year veteran of the force, rises early in the morning in his upstate Goshen, New York home, moves quietly out of his house without waking his wife Donna (Maria Bello) or his four children and reports to work on the beautiful autumn day at the Port Authority Bus Terminal. Will also departs early in the morning from his Clifton, New Jersey frame house and leaves his pregnant wife Allison (Maggie Gyllenhaal) and young daughter. After the men get their daily briefing at headquarters Will is shown working his beat at the terminal clearing the area of panhandlers, undesirables, prostitutes and giving directions to tourists. The men are called back to headquarters when word of a plane crashing into the WTC is reported, and John is in charge of taking a bus load of men down to the scene of the crash. At the site, John relays his orders are to help evacuate those workers trapped in the building and asks for volunteers. Will is one of the five who volunteer. While the men are in the building, it collapses and of their rescue party only Will and John survive but are pinned beneath 20 feet of rubble. While the survivors chatter for the next 12 hours to keep up their spirits, they are buoyed when talking about their families–which keeps them motivated to stay alive–their jobs, their aspirations and their regrets. The film intercuts showing the men struggling to stay alive in the darkness and how their wives handle the news that their men are missing–desperate for any piece of news in all the confusion and horror of the day. It also shows Sheboygan, Wisconsin, police officers calling the terrorists “bastards” and driving down to the WTC to volunteer their services. In Connecticut, an accountant and ex-Marine staff sergeant Dave Karnes (Michael Shannon) goes to church and gets a message from the Lord to go to Ground Zero and use his special talents to help. He drives down in uniform and newly gotten buzzcut to the WTC site and upon viewing the carnage says: “God made a curtain with the smoke to shield us from what we’re not yet ready to see.” The Staff Sergeant will go into the collapsed building with PFC Dave Thomas, another errant marine, and miraculously they will locate John and Will, as Karnes will call on his cell phone for a rescue team. The rescue effort is heroically led by Emergency Service Unit officer Scott Strauss (Stephen Dorff), with officer Paddy McGee (Stoney Westmoreland) and paramedic Chuck Sereika (Frank Whaley) by his side. These brave men, along with a crew of fireman and city cops, risk their lives by entering the collapsed building to rescue the strangers, as they eventually through a tireless effort free the badly injured men who will both have to undergo numerous surgeries and will be shown two years later forced to retire but glad to be alive.

With the full cooperation of the real McLoughlin and Jimeno, Stone focuses completely on two of the twenty people rescued alive from the tragedy that caused something like 2,749 deaths. That they were true heroes and were rescued by other true heroes, is a story worth telling in such cynical and dark times–even if it’s only five years removed from the event and might still be too soon for some to take it all in. It’s not easy to make art out of such a devastating tragedy (though Hollywood tries to do it all the time), but Stone’s post-9/11 look at Ground Zero shuns the art part and tries to get to the sensibilities and priorities of what went right during the tragic day. That he accomplishes his limited aim in making a superbly crafted commercial film that’s built solidly around a no-nonsense story of courage and survival and one that’s less entertaining than informative, is good enough for me since it all rings true even if the film looks like one of those made for cable movies. 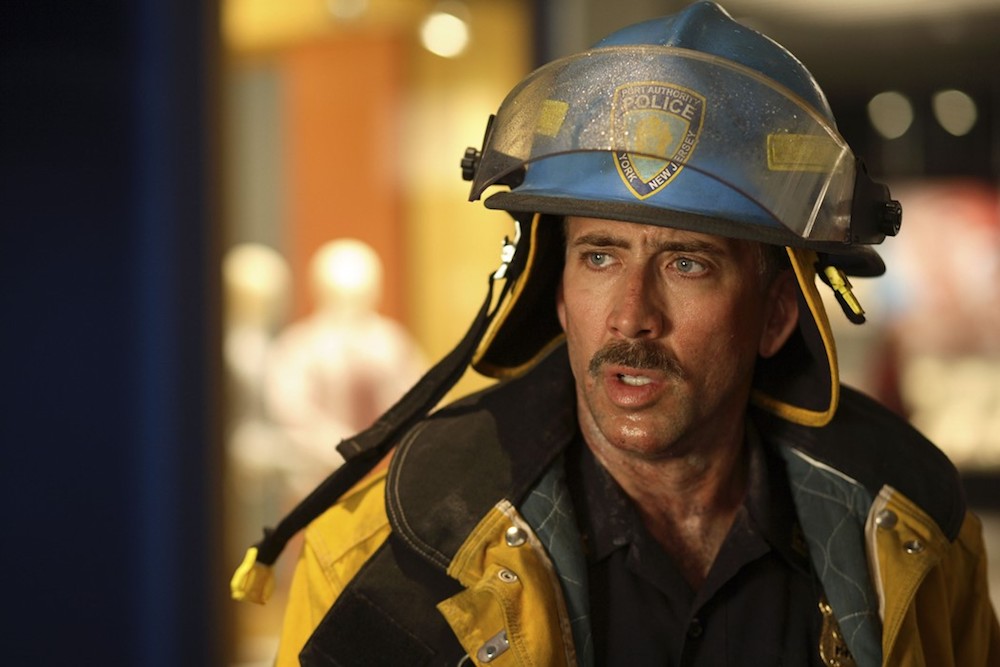 LOVE ON THE GROUND

AN OCCURRENCE AT OWL CREEK BRIDGE