“Bad taste can sometimes be fun (check out the Warhol films), but when it’s not it turns out to be just plain irritating like this version of The Producers.”

It’s a remake of Mel Brooks’ 1968 debut as a director (starring Zero Mostel and Gene Wilder) and adapted from the still running 2001 smash-hit Broadway play that was also directed and choreographed by Susan Stroman (in her movie debut). The original bombed on its theater release, but gained cult favor later on. This version manages to take all the fun and sparkle out of the original, now a classic, and offers only the showstopping song and dance number of Springtime For Hitler that has any bounce to it. The tacky gags, crude pratfalls and vulgar storyline fail it this time around, as the cast sweats a lot but things just don’t work–they are all leaden (even its co-stars Nathan Lane and Matthew Broderick, who found success with it on Broadway). It follows the play faithfully, which is another reason it doesn’t translate well to film.

Max Bialystock (Nathan Lane) plays a once renown Broadway producer who in recent times has been reduced to a has-been raising money for his flop shows by sleeping with wealthy elderly ladies. Leo Bloom (Matthew Broderick) is a mousy public accountant who is unhappy with his job and dreams of being a producer. While doing Bialystock’s books, he informs the conniving producer that he can make a fortune by producing a flop and through “creative accounting” oversell the shares and when the play closes all they have to do is file it as a tax loss and keep all the loot from the backers. With that in mind they believe they have discovered the worst possible play; it’s written by a neo-Nazi living in New York, Franz Liebkind (Will Ferrell). After a series of unfunny Nazi gags and an over-the-top lame shtick by Ferrell, the producers go off and hire the worst director they can think of. That would be the flamboyant homo director Roger DeBris (Gary Beach) and his fruity companion Carmen Ghia (Roger Bart). Their act is inundated with a long barrage of insulting stale gay jokes revolving around homosexual stereotypes. Then Ulla (Uma Thurman), a Swedish sexpot, shows up in the producer’s office sporting a skimpy outfit and showing a lot of leg; she gets hired as an actress and secretary after ogled and drooled over in comedy that seems passe and dredged up from another era (the film is retro 1950s but those simple-minded sexist jokes don’t cut it anymore–at least not in this film version). After collecting two million bucks from the blue-haired ladies due to Max’s sexual prowess, the boys are in business to stage their guaranteed flop and begin casting (which results in more tedious musical numbers). The surprise comes when the play is viewed as a campy hit.

Bad taste can sometimes be fun (check out the Warhol films), but when it’s not it turns out to be just plain irritating like this version of The Producers. 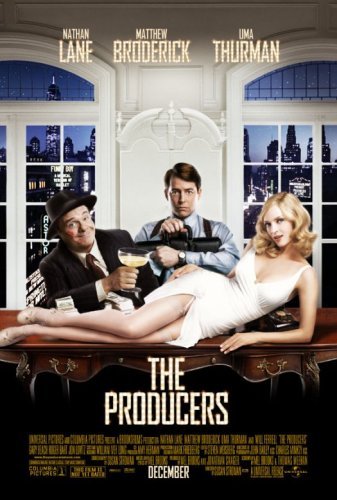