“In the end everything comes out as mawkish as you would expect from a Robin Williams film.”

Comic turned director-writer Bobcat Goldthwait (“Stay”/”Shakes the Clown”) awkwardly takes easy pot shots at the cynical marketing of inspirational feel good sentimentality that may arise over a suicide and has some fun with how easy it is to get away with literary fraud in a quest for celebrity. The dramedy unsuccessfully veers between gross comedy and heartfelt drama, trying too hard to be profound about the human condition when it has little to say that isn’t cynical and soon flattens out as a bad one joke concept.

The heavy-handed message film about what it really means to be lonely and about those marginalized who do not follow the crowd, was anything but edgy. It was so transparent and phony it only made me want to jump in the lake when I wasn’t cringing at the weak satire. The film’s best feature, believe it or not, is a near moving performance from a restrained Robin Williams, who plays a not too flattering obsequious sad-sack with almost the right amount of pathos and darkness. But the screenplay is as phony as the phonies in the film it ridicules, and in the end everything comes out as mawkish as you would expect from a Robin Williams film.

Williams plays the divorced single dad Lance Clayton, a mild-mannered unpopular suburban high school poetry teacher and frustrated unpublished novelist who is burdened with a dumb, obnoxious, foulmouthed, antagonistic, anti-social, negative, pudgy, loner 15-year-old son, Kyle (Sabara). The kid masturbates in his room by choking himself, and has insults for everyone but his one school friend, a loser named Andrew (Evan Martin). One day dad finds his loser son has accidentally killed himself by asphyxiation over his bizarre way of masturbating and out of shame covers up his death as a hanging suicide and then writes an emotionally eloquent letter on the kid’s computer addressed to those at school who hated him. The smarmy principal (Geoff Pierson), the smarmy grief counselor (Tony V.), the smarmy New Yorker published English teacher colleague (Henry Simmons), the smarmy school art teacher who is dad’s secretive sometime girlfriend (Alexie Gilmore), and all the smarmy students who hated Kyle now perceive him as a misunderstood genius and are so overwhelmed by the suicide letter that Kyle becomes martyred by the school community as they rally in full support of him by conveniently forgetting why they couldn’t stand him. Dad then ghost writes a fake journal entitled “You Don’t Know Me” and that gets the attention of an Oprah-like national TV program. Thereby the douchebag kid gets a posthumous makeover as a sensitive lost soul and now everybody in blind adoration can’t get enough of Kyle.

It comes with an unsatisfying smarmy ending, whereby Williams lectures that “The worst thing in life is ending up with people who make you feel all alone.” With that dad chucks away his new popularity and bonds with losers Andrew and his plain looking eccentric neighbor, as they watch zombie movies on TV after Williams’ new phony pals desert him when he fesses up to his ghost writing and that his kid was a first-class prick (If you still didn’t get what the director was aiming for, it has Williams attending a showing of Tod Browning’s Freaks).

Not one character seemed to be anything more than a set-up for the film’s contrived agenda, in a loud film that was too disingenuous for me to find any character to identify with or care about as the film eventually punks out and offers up great heaps of gooey drivel after a good start realistically showing an unpleasant father-son relationship. 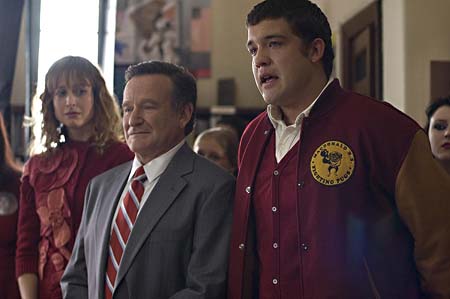