“Sometimes goes cornball, but comes out of that spill on its feet due to Hopkin’s warm-hearted vulnerable performance and the lovable nature of the story.”

The Kiwi-Aussie Roger Donaldson (“The Recruit”/”The Bounty”) is writer-director of this whimsical fictionalized biography of Burt Munro (Anthony Hopkins), who was born in 1899 in Invercargill, New Zealand. The enthusiastic, kooky, likable and upbeat Burt started building in 1920 an Indian motorcycle in his cinder-block shed (which doubles as his home) and remained for the rest of his life obsessed with revamping that motorcycle to make it go faster. The 67-year-old made his mark in the world when he set the land-speed world record of 201 mph at Utah’s Bonneville Salt Flats (a vast race course of packed salt) in 1967 riding his custom-built streamlined motorcycle, using his ingenuity to build it from spare parts for the last 25 years with as little money as possible. In 1971 Donaldson made a documentary, “Offerings to the God of Speed,” about the plucky then 72-year-old Burt Munro, and this film is a belated follow-up homage to the laid-back Kiwi.

It covers a year in his life when he rebuilt his motorcycle at home in New Zealand (the neighbors objected because of the noise, but the neighbor’s boy named Tom admired him and liked to hang around in his workplace and listen to his stories while he tinkered with the motorcycle). Burt brought his modified 1920 Indian Scout motorcycle to run in Utah’s Bonneville Salt Flats, as his racing club paid some of the expenses and for the rest of the dough he dipped into his life savings. This was his one dream for the last twenty-five years: to compete in Bonneville and break the speed record. The film’s highlight is how Burt impressed everyone at the track and after a struggle to enter the competition, with the help of respected biker Jim Moffet (Chris Lawford), he got the stuffy officials to bend the rules and let him run even though they doubted his motorcycle was safe, he wasn’t properly pre-registered and they thought he was too old.

Anthony Hopkins gives a superb performance as the eccentric obsessive, getting everything right from the New Zealand accent to his character’s colorful personality. In America, Burt meets some people who feel his energy and help in different ways. They include the following odd collection: a used car salesman (Paul Rodriguez), a Native American who shelters him for the night, a friendly transvestite (Chris Williams), a lonely widow (Diane Ladd) who comes through with some welding equipment, a naive soldier (Patrick Flueger) hitching a ride who is home on leave from dropping Agent Orange in Vietnam, and a bunch of good ol’ boy racing fans at the track site who give him shelter, moral support and help him acquire some equipment in his last minute tinkering.

The old geezer proves he’s a master mechanic and skilled racer, even if he’s not so good a car driver on the road. The film sometimes goes cornball, but comes out of that spill on its feet due to Hopkin’s warm-hearted vulnerable performance and the lovable nature of the story. It tells us nothing about Burt’s life prior to the time of the story, as the image left is of a friendly old man who lives for his motorcycle dream and perseveres despite many physical ailments and nervous tics due to his insatiable passion for life. 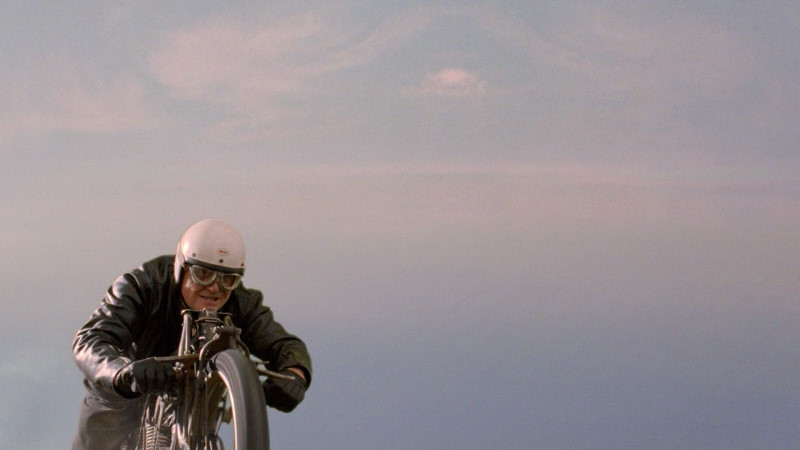