“This is Fassbinder at the top of his game.“

With his usual verve Rainer Werner Fassbinder (“Effi Briest”/”Satan’s Brew”/”Lili Marleen”) admirably directs and cowrites (with Fritz Müller-Scherz) this fascinating three-and-a-half-hour two-part seething detective sci-fi television film for German TV (shot in Paris), whose major fault is that it moves too slowly. It’s based on the influential 1964 novel “Simulacron-3” by Daniel F. Galouye. The futuristic sci-fi film is about a state-sponsored advanced secret computer project called Simulacron, which is able to create a parallel world inhabited by computer-generated people (identity units who think of themselves as human) that will be used to help predict what the future will be like–including consumer habits.

The director and creator of Simulacron 1, Dr. Henry Vollmer (Adrian Hooven), acts bizarre at a party given by the nefarious scheming boss of the Institute for Cybernetics, Herbert Siskins (Karl Heinz Vosgerau), the manipulative industrialist boss the idealistic scientist has differences with over his aim to secretly make this humanitarian project into another capitalist elitist venture project for the ‘haves.’ Vollmer then mysteriously dies at the party and his assistant Dr. Fred Stiller (Klaus Löwitsch) takes his place as director (also an idealist, but is chosen because he’s the one most capable of completing the project). Stiller also begins to feel ill and act bizarre like Vollmer when he argues with the autocratic boss, and his sanity is questioned when he mentions to the police that the head of security, Guenther Lause (Ivan Desny), disappeared after telling him he suspects Vollmer was murdered and his death was not an accident as believed. Lause also mentions that Vollmer told him he knew something about the risky project that would cause great fear in anyone who knew the secret he discovered. When Stiller tries to get more info on Lause, everyone on the project tells him no such person exists–that the head of security is Hans Edelkern (Joachim Hansen). As the curious scientist turns detective and questions Lause’s disappearance, he smells something fishy. There’s also the temporary disappearance and then startling reappearance of Vollmer’s daughter Eva (Mascha Rabben), the attractive young woman Stiller begins a romantic relationship with. When the giant United Steel secretly partners with the Simulacron project, Stiller rails at Siskins’ decision–figuring that would compromise the project’s integrity. When Stiller probes deeper into the computer project he now heads, the line between the real and virtual world gets blurred and Stiller’s own existence becomes suspect.

This rarely seen film in America, or for that matter in Germany after its original broadcast, was restored by the Fassbinder Foundation and turned into a 35mm film while also released in 2010 as a DVD in Europe (PAL, Region Code 2) by Second Sight. Its enticing mind-blowing sci-film theme pre-dates The Matrix by 26 years (and I found it more intellectually stimulating) and anticipates David Cronenberg’s eXistenZ(1999)). For the then 27-year-old Fassbinder, it was the rare time he had a big budget to work with and shows how his artistic integrity stays intact as he makes a stunningly beautiful visual film (with the corporate setting blandly filled with plastic furniture, many TV monitors for spying, lots of cold chrome surroundings and intrusive glass structured offices that don’t allow for privacy) that subversively attacks the establishment for their underhanded power grab and excessive greed. This is Fassbinder at the top of his game. 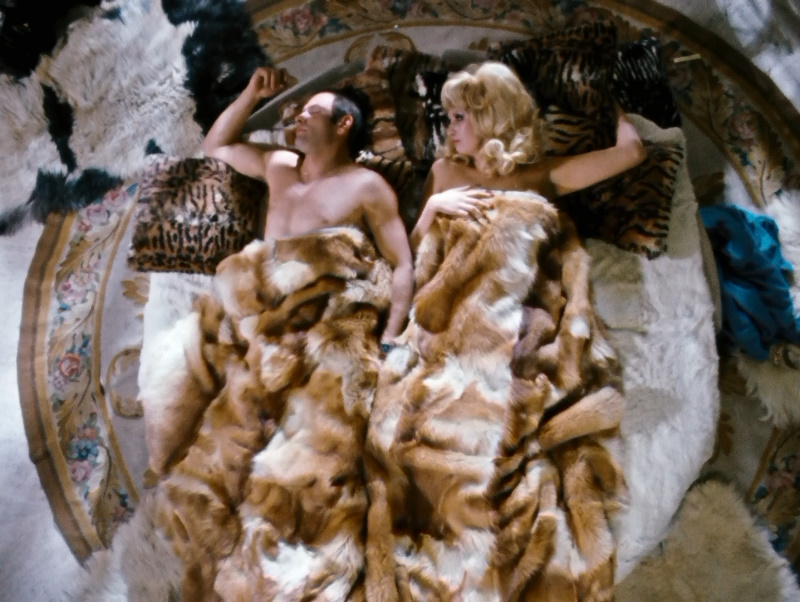