The British adaptation of the 1910 D.H. Lawrence novel by the rebellious Brit filmmaker Ken Russell (“Mahler”/”Tommy”/”Gothic”) captures the author’s radical and uncouth thoughts about love and marriage in England in the 1920s. It also gets into the attitudes of those living in the mining community of Nottinghamshire, where the pic is set. Writer-producer Larry Kramer hands in a literate script. The lush country photography by cinematographer Billy Williams is gorgeous, the period detail is excellent and the acting of their irritating characters by Oliver Reed, Alan Bates, Glenda Jackson and Jenny Linden is first-rate. It’s Russell as restrained as he can be, who has fun delving into the sexual explorations of the author. The pic is famous for its sweaty nude wrestling scene by the fireplace between Reed and Bates. It succeeds in being a decent film about a classic book aside from its pretentious dialogue, more the fault of Lawrence than Kramer.

The wealthy mine owner’s son Gerald Crich (Oliver Reed) and his upper-class childhood friend, the school inspector Rupert Birkin (Alan Bates), attend a wedding ceremony where the newlyweds drown in a lake at a picnic and where the boys meet a pair of virgin sisters, the headstrong, free-spirit, feminist artist/teacher Gudrun (Glenda Jackson) and her conventional sweet schoolteacher sister Ursula (Jennie Linden), daughters of working-class schoolteachers. Both have a love affair leading to marriage and a honeymoon together in Switzerland. When Gudrun grows weary of Gerald and has an affair with the bisexual German sculptor Loerke (Vladek Sheybal), the cuckolded Gerald almost strangles the sculptor to death and then wanders forlornly into the mountain snow where he freezes to death. Meanwhile Rupert has a healthy sexual but incomplete marriage with Ursula, and reflects on the inadequacy of love as life’s saving grace.

The soap opera story tackles class warfare, sexual freedom and life in a changing more open English society. Lawrence’s polemics on love might not be appreciated by some, but they are well-served by Russell. It’s a passionate and appealing movie that does not achieve greatness because the story is not great, but is modestly artful pic and is most entertaining. 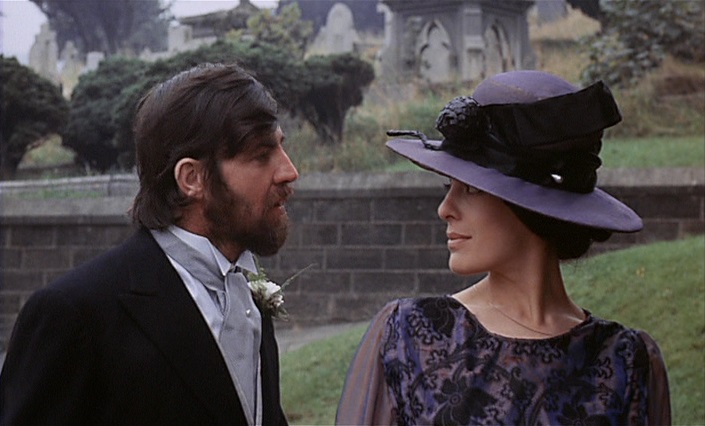