WOMAN IN THE DUNES (Suna No Onna)

The story takes place sometime in the 1920s, but it feels timeless. Tokyo entomologist Niki Jumpei (Eiji Okada) is on vacation in a remote unnamed seaside desert region of Japan; he is collecting specimens from the local insect population in the hopes of discovering a new species of insects so his name can be honored in the scientific insect books. After missing the last bus back to town due to daydreaming about philosophical questions, he is offered shelter for the night by members of a poor village. He is taken to the side of a sand dune, and takes a rope ladder down to reach the house. Here he finds a young widow (Kyôko Kishida) living alone, who treats him to a delicious shellfish and rice meal. He learns that her husband and child were swallowed up by a sandstorm last year and that at night her job is to shovel sand while digging for a water supply. The sand is placed into the lowered buckets and must be removed to keep her house from collapsing; the inferior sand (it has salt in it) is sold unlawfully at a low cost to construction firms. In exchange, the locals provide her with food and water rations. This shady arrangement keeps the town solvent. The woman’s lifelong task reminds one of the Greek myth about Sisyphus.

In the morning, the man finds no rope ladder or any means of escape. He is trapped in the sandpit and made a prisoner of the woman, who tells him she needs a man to help with her nightly duties. The embittered man after many attempts finds it impossible to escape and takes out his anger on his host. Three months go by and no searchers come looking for him. The man, despite his anger at the woman, becomes her lover and continues on with his experimental work collecting insects while trying to find a water supply for the villagers through scientific means. The two are disconnected from the world and this alienation draws them closer than any feelings they might have for each other.

The hypnotic film, made for only $100,000, won a Special Jury Prize at Cannes in 1964 and received two Oscar nominations. It contrasts the scientist’s cerebral thoughts, that are highly valued in the need to advance civilization, against the primitive mindset of the peasant woman’s aim to just survive. Teshigahara speculates if each will find redemption by fulfilling their life’s challenges. He shows concern for both characters and goes out of his way to present each in a sympathetic light in their life struggles to find a purpose for living. The woman despite her life seeming so meaningless–living only for life’s basic needs (eating, sleeping and sex). The man despite his life seeming so artificial–living through his dreams, pleasures and ideas. 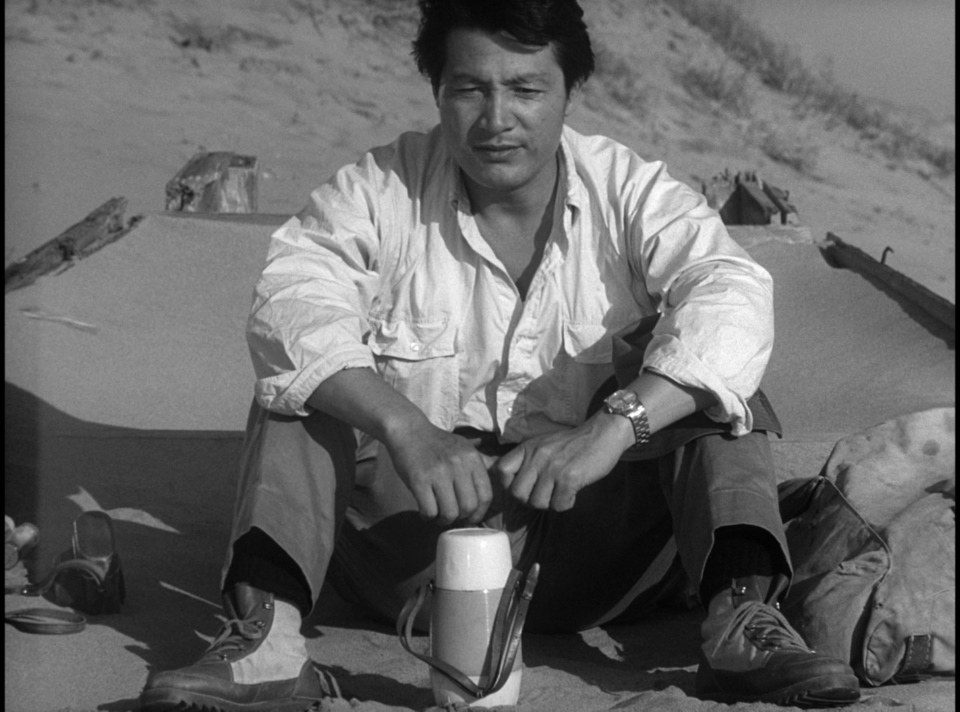