“A purely Hollywood hokum story of the lycanthropy legend, but done with much gusto and fun.“

A purely Hollywood hokum story of the lycanthropy legend, but done with much gusto and fun. The cast is superb; the atmosphere of an English village with an Alpine background setting and plenty of fog and dense woods, gives the film an eerie look. The dialogue is spellbinding at times. The film covers all angles about werewolves, as Curt Siodmak’s original script is so believable that films ever since have used the nonsense he perpetrated here as the absolute werewolf gospel for horror films.

The story begins as the hulking, broad shouldered Larry Talbot (Lon Chaney, Jr.) returns to his diminutive father’s castle after being away for 18 years, upon learning of the death of his older brother in a hunting accident. Sir John Talbot (Claude Raines) eagerly welcomes him home as the sole heir of the estate that goes back five generations, and tells him to get reacquainted with the three hundred year old castle he will now live in. Larry is not the intellectual type, he prefers to work with his hands, showing off to his father the telescope he built. While testing the telescope he zooms in on an attractive young blonde Gwynn Conliffe (Evelyn Ankers) who works in her father’s antique shop. Larry buys a rare cane with a silver pentagram of a wolf-star as a top and flirts with Gwynn, inviting her for a walk at night to see the newly arrived gypsy fortune tellers in the woods.

Gwynn arrives with her girlfriend Jenny Williams and tells him that she’s engaged to Frank Andrews, the head gamekeeper on his father’s estate. They decide to get their fortune read by the gypsy Bela (Lugosi) who does Jenny’s first, as they leave her there and walk in the woods. When Bela sees a pentagram on the palm of her hand, he warns her to get out of the woods immediately — she’s in great danger.

Jenny while fleeing is attacked by a werewolf and is killed. Larry hearing her screams runs in that direction and beats the wolf to death with his silver cane, but gets bit in the process. Gwynn was too far away to see what happened. When back in the castle, his father, the police chief, Captain Paul Montford (Bellamy), and Dr. Lloyd (William), question him. They tell him the body found by the slain girl is not a wolf as he said, but is Bela. Larry tells them that he’s not crazy that he knows he saw a wolf and was bitten, but he can’t explain why there is no visible bite mark. They tell him to get some rest and don’t worry, that he’s under strain from his long trip.

Bela’s mother Maleva (Ouspenskaya) tells Larry that her son was a werewolf and that now that he’s bitten he is also one, and that only silver can kill a werewolf. She tells him, “Even a man who is pure at heart/And says his prayers by night/May become a wolf when the wolf-bane blooms/And the moon is full and bright.” Larry looks at her in a confused state, he’s not one for such intellectual things. She also gives him a pendant of a wolf-star to wear as protection. When he asks dad about it he’s told, it’s all in your mind. Sir John goes on to say that everyone has a good and evil potential within them, but sometimes the evil takes over and comes in the form of an animal.

Larry’s legs become hairy as he can’t help himself from turning into a werewolf, killing the local gravedigger. His transformation to Wolfman took a full 24 hours to film–and is convincing, mainly because of the great cosmetic efforts of Jack P. Pierce.

The town under the police chief organizes a manhunt for the killer, thinking they are after an ordinary wolf. Larry again turns into a werewolf and gets caught in one of the traps, but escapes with the help of Maleva.

At the castle, he tells dad and wants to flee the village. He is especially upset because when visiting Gwynn he saw the sign of the pentagram on her palm and gave her the pendant for protection. His dad says he can’t flee and defile the good family name. So he straps his son in a bolted room and goes out at night with the men hunting the wolf, but not before Larry insists he take the silver cane.

While hunting the wolf the men hear the screams of Gwynn being attacked and Sir John comes to her rescue, beating the werewolf to death with the silver cane. When the rest of the hunting party comes, they see Larry lying dead and that Gwynn is alright. Captain Montford then says, Larry must have tried to save Gwynn from the wolf.

“The Wolf Man” is a B-movie that works so well, even if the story is impossible to believe. The stellar cast acts out a modern link between the wolfish desires of the Lon Chaney character and how society can’t help itself today in the same psychologically wolfish way as the Wolf Man was trapped in. The film had an undeniable special quality that imbued it with a lasting magic. This one’s a classic, one of the greats in the horror genre. 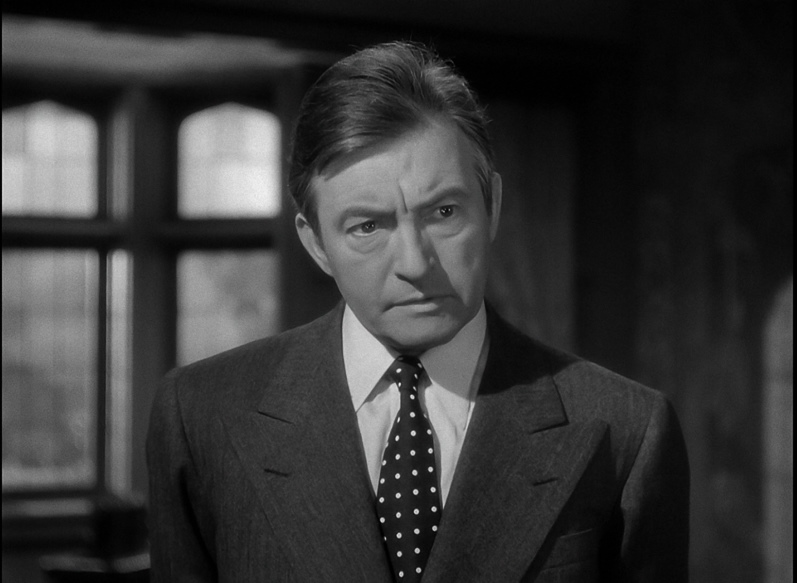