WITNESS FOR THE PROSECUTION

Billy Wilder (“Double Indemnity”/”Stalag 17″/”Sunset Boulevard”) directs this enjoyable but overly clever courtroom drama filled with trickery, twists, an overdose of scenery chewing by Charles Laughton, too much artificiality and a highly charged but contrived ending. Though the smart dialogue makes it all palpable, and there’s enough excitement generated to keep the viewer alert throughout. It’s based on the play by Agatha Christie and written for the screen by Harry Kurnitz, Larry Marcus and Billy Wilder. Marlene Dietrich gives possibly the best performance of her career as the woman who will do anything for the man she loves, even at one point she is asked to display a Cockney accent.

Sir Wilfrid Robarts (Charles Laughton) is a grumpy aging London barrister convalescing from a recent heart attack, under the care of the bossy nurse Miss Plimsoll (Elsa Lanchester, Laughton’s real-life wife) and under his doctor’s orders not to indulge in brandy, cigars or criminal courtroom cases. But that all changes when he’s presented with an intriguing murder case by solicitor Mayhew (Henry Daniell). Sir Wilfrid believes the affable accused man is innocent and therefore decides to defend the out of work mechanic, egg beater inventor and handsome former RAF sergeant named Leonard Vole (Tyrone Power), who will be tried for the murder of the wealthy widow Emma French (Norma Varden). The lonelyheart was someone the likable chap befriended in a hat store and wormed his way into her life trying to get her to finance his invention. He claims not to have known she would leave him in her will eighty thousand pounds, but that testimony is contradicted by French’s hard of hearing Scottish housekeeper (Una O’Connor). Vole’s German-born wife Christine (Marlene Dietrich), someone he loves dearly, is his only alibi. But when his defense attorney says her testimony wouldn’t be worth much, she’s called as a witness for the prosecution and the prosecutor gets her to admit that she lied about the time frame and the blood found on his clothes. This damaging evidence seems to be curtains for him until all the theatrical tricks are played out and the rousing climax lets us see what really happened.

I was not impressed with all the heavy-handed courtroom dramatics as most critics seemed to be, but loved the courtroom dueling between lawyers and Alexander Trauner’s recreation of the Old Bailey. Those were the most magnificent things about the film, along with the surprising effective emotional performance by Dietrich–not asked to sell her bod for this fancy pic, except for merely baring a leg in a cabaret scene (Where else!). 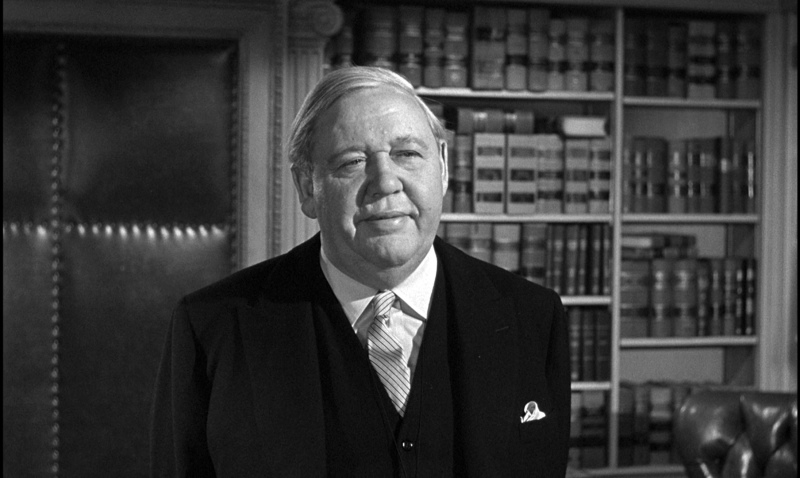