AT WAR WITH THE ARMY

“Sets the low standard for all the team’s future comedies by Lewis doing the physical comedy and Martin operating as the aloof straight man.”

This was the third film appearance of Dean Martin and Jerry Lewis (who made made 16 pictures together in their long career), but it was the team’s first starring vehicle. They had supporting roles in the My Friend Irma movies. It’s scripted by Fred Finklehoffe, Charles Ray MacCallum, Henry May and Jerome E. Rosenfeld from a play by James B. Allardice. Hal Walker (“Sailor Beware”/”My Friend Irma Goes West”/”That’s My Boy”) helms this loopy cornball tale about army bureaucracy and the tangled romantic life of Martin. The slapstick comedy is mostly from hunger; their best gag has Lewis unable to work the soda machine. Their impersonation of Bing Crosby and Barry Fitzgerald as the priests of “Going My Way,” also had some bubbles in it.

At an Army training base during WW II Dean Martin is the suave ladies man top sergeant Victor Puccinelli and Jerry Lewis is the sad sack private Corwin who is always messing up and getting K.P. or stuck policing the area. Though they were childhood pals and were a song-and-dance team in civilian life, Puccinelli treats the nebbish screw-up Corwin as if he were dirt. When Corwin begs his pal for a weekend pass to visit his pregnant wife, he’s rejected with insults. Puccinelli wants out of his boring desk job and a transfer to the war zone, and also spends his time trying to avoid his ex-girlfriend, the harebrained pregnant PX worker, Millie (Jean Ruth).

Mike Kellin repeats his Broadway role as Lewis’s nemesis, the tough platoon sarge; while Polly Bergen makes a brief appearance as Martin’s latest girl. Angela Greene is the gossipy wife of the company commander, who knows all the orders coming down before her hubby.

The film sets the low standard for all the team’s future comedies by Lewis doing the physical comedy and Martin operating as the aloof straight man. 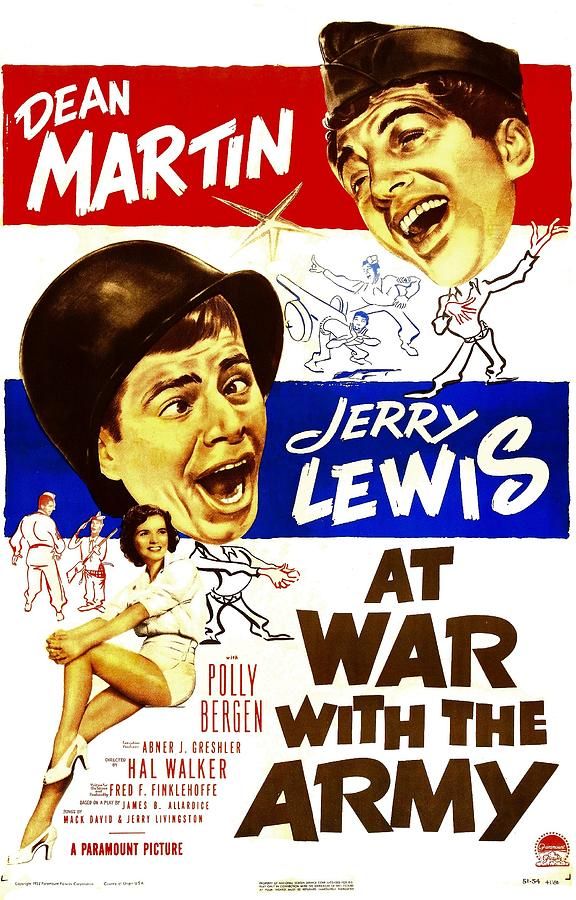