This is the austere middle leg of Ingmar Bergman’s trilogy that explores his search for redemption in the face of God’s silence and has a spineless pastor question his meaningless and joyless existence. It’s sandwiched between Through a Glass Darkly and The Silence. This bleak chamber piece serves as Bergman’s farewell to his Lutheran pastoral father’s strict religious upbringing; the filmmaker comes to believe that God never spoke because he never existed.

It opens in November to a small rural Swedish village and the sickly pastor Tomas Ericsson (Gunnar Bjornstrand) is mechanically conducting a Sunday service at Holy Communion with only five attendants–a congregation that will dwindle to one by the film’s end. For the last four years, ever since his beloved wife died, the aloof pastor has questioned his belief in a God and his sermons have suffered because of his doubts. His sense of being is challenged by his drab everyday existence. A nagging plain-looking spinster schoolteacher named Marta (Ingrid Thulin), suffering from eczema (symbolizing a rejection of the flesh), has shamelessly set her sights on bagging him for a husband and won’t take no for an answer even though he openly tries to distance himself from her unwanted romantic attention. The pitiful pastor has given up on worldly love being something permanent and has become self-absorbed in his own dreads and fears to care for anyone else, while the idealized love found in Christianity is no longer believable for him. Through a later conversation with the hunchbacked sexton (Allan Edwall), we learn that the pastor believes that even Jesus had doubts at his end and believed God had forsaken him and that the disciples who knew him best never quite understood what he was saying though living with him for three years. The pastor’s doubts are furthered after a chat with a troubled fisherman parishioner, Jonas (Max von Sydow), who is in a deep funk over the possibility of the Communist Chinese dropping the atomic bomb and causing the annihilation of the world. When Jonas commits suicide and leaves a pregnant wife, the pastor realizes that he’s no good at his job–that he is of little use to those who might need support and can only offer the uncertainty that he now carries within him.

It’s stunningly photographed in black-and-white in the wintry country setting by Sven Nykvist, which complements the coldness of the barren landscape with the dullness of the church people and the way they conduct themselves in such a sour and unfeeling manner. The ensemble cast are expressive in conveying the inner pains of their characters and give first-rate performances. For Bergman, organized religion doesn’t let in the winter light and let people warmly communicate with each other; through use of stark images and heavy symbolism, he tries to show us why he despairs about this and why religion isn’t all that it’s cracked up to be as it can only offer empty words in the face of God’s silence. 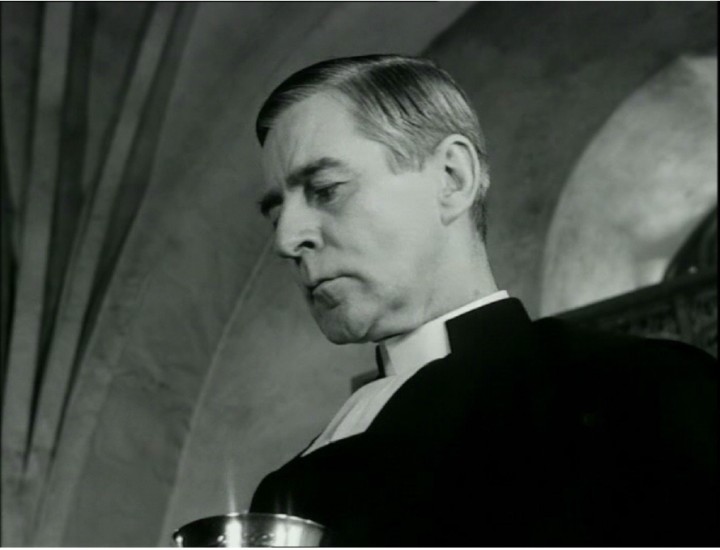