This was the unsung Ukrainian born Larisa Shepitko’s (“Heat”/”You and Me “/”The Ascent”) first feature after graduating from the prestigious All-Russian State Institute of Cinematography (VGIK). Shepitko’s mentor was the great Soviet filmmaker Aleksandr Dovzhenko (“Arsenal”/”Earth”), a fellow Ukrainian, who taught her at the state film school how to make lyrical subjective films.

With this acclaimed psychological drama, based on a true story and written by Valentin Ezhov and Natalya Ryazantseva, Shepitko immediately was recognized as a talented new director in Soviet cinema. Shepitko was an icon of sixties and seventies Soviet cinema, who only made four films in her short career. She was killed in a car crash in 1979 at the age of forty just as she was beginning to make a name for herself on the international stage. This film shows her genius for making a moving personal film that captures the universal subject of loneliness in her heroine. The main character was played by the great Soviet character actress Maya Bulgakova, whose subtle portrayal brought depth and compassion to her elegant brooding character who must reconcile memories of her glory days with her current drab existence and must also bridge a wide generation gap. The fluid and pitch-perfect storytelling, leaving an ambivalent note about the future, is a brilliantly conceived work of art.

Many of Shepitko’s illustrious school contemporaries such as Tarkovsky and Parajanov and her distinguished surviving director husband Elem Klimov went onto international fame, while the just as talented Shepitko fell under the radar and is not as well known today in the cinema world as her compatriots.

The 42-year-old Nadezhda Petrukhina (Maya Bulgakova) is a decorated war hero fighter pilot from World War II and has been rewarded by the Soviet state with a position as the principal of a provincial trade school and a post as people’s deputy in the city council. This heroic woman is single and has an estranged adopted daughter (Zhanna Bolotova) getting married to an older teacher (Vladimir Gorelov), who has embarrassed mom by not introducing him to her until she forces the issue and bursts in on him in his apartment while he’s entertaining his intellectual friends.

Nadya finds it uncomfortable being the stern authority figure disciplining unruly students who are proud of their independent spirit, something she once had but now feels like a relic only going through the motions of living. The reasonable heroine shows a good humor with everyone and displays empathy for her students even while making them be responsible for their actions. She’s also locked into a loveless romance that’s going nowhere with the museum director (Pantelejmon Krymov), in whose museum Nadya is on exhibit with other pilots and stuffed animals for her war heroism. That scene in the museum tells you all you want to know about where the pic is heading, as Nadya’s present when a visiting class is taken on tour and one little girl asks the guide: “Is the pilot Nadezhda Petrukhina still alive?” 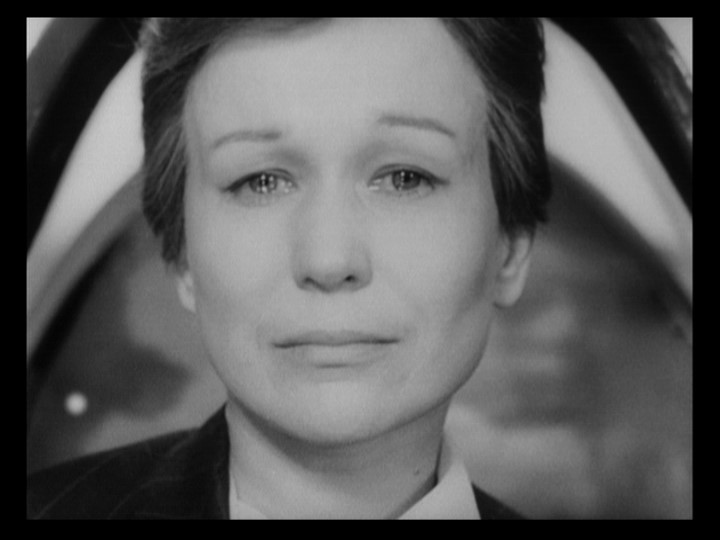