Breezy, jejune and low-brow comedy/crime drama programmer. It’s the 7th in a total of 14 in the Blackie series, that’s energetically directed in his directorial debut by Budd Boetticher (“Ride Lonesome”/”The Tall T”/”Arruza”).It’s based on the 1919 novel “Boston Blackie’s Mary” by Jack Boyle and is carelessly written by Paul Yannitz with credibility issues as tall as the Empire State Building appearing over its story line.

Affable ex-thief Boston Blackie (Chester Morris) and his pint-sized reformed thief valet Runt (George E. Stone) are secretly employed in a tool trade business enterprise by eccentric millionaire Arthur Manleder (Harrison Greene), when Inspector Farraday (Richard Lane) accuses Blackie in the newspapers of stealing the valuable Blue Star of the Nile diamondwhile it was under heavy guard on exhibit in NYC’s Carleton Plaza Hotel.But it’s only a ploy used by Farraday to get the hard to find Blackie to come to his office and help him solve the theft.

Blackie gets deputized as a cop, gets a badge and goes under disguise as an old professor to search the office of the Carlton’s young assistant general manager, George Daley (Robert E. Scott), his numbrtr one suspect, to discover the insider indeed robbed the diamond and secretly hid it in his hotel switchboard operator sister Eileen’s (Dorothy Malone) handbag while he naively awaits contact from two ruthless small-time mugs, Matt Healy (Robert Williams) and Paul Martens (William Wright), to fence the hot rock.

Sharp-eyed sexy reporter for the NY Bulletin, Dorothy Anderson (Janis Carter), recognizes Blackie in his disguise and becomes involved with the investigation by mysteriously popping up whenever the last thing wanted by Blackie was to be in the presence of a nosy reporter .

The film’s most crass and funny sight gag has the two diamond thieves standing like manikins in Jumbo Madigan’s (Joseph Crehan) pawnshop, with the owner lying on the floor after being critically wounded from Martens’ gunshot, while the two policemen ordered to remain with the vic until the ambulance comes are casually playing gin rummy near where the body lies. For that scene alone, the film is worth seeing.

It exactly follows the Blackie formulaic blueprint and gives the viewer uncritical escapist entertainment and not much to think about, as the pace is racetrack quick which makes the absurd story go by like a blur. 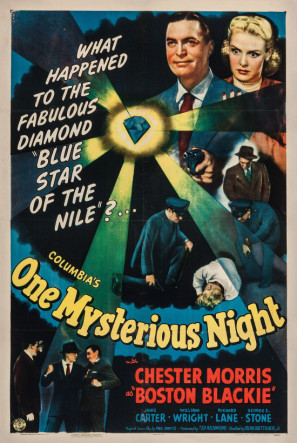