A captivating, soul-searching, personal redemption adventure picture based on the 2012 memoir “Wild: From Lost to Found on the Pacific Crest Trail” by Cheryl Strayed. It’s aggressively written by novelist Nick Hornsby and emotionally directed by the talented French-Canadian Jean-Marc Vallee(“The Young Victoria”/”The Dallas Buyers Club”/”Café de Flore“). It chronicles the 1,100-mile solo hike along the Pacific Crest Trail, from the Mojave Desert to Washington State, in 1995, by Cheryl Strayed (Reese Witherspoon). Cheryl uses the experience gained over three months to make a break with her self-destructive past that includes drug abuse, reckless adultery and irresponsible decision-making behavior. It comes at a time Cheryl is despondent over her divorce after 7-years of marriage to her caring and forgiving mate Paul (Thomas Sadoski) and the cancer death of her loving divorced mom Bobbi (Laura Dern).

The pic tells of the 22-year-old amateur lady hiker Cheryl’s hardship on the trails and the possible danger awaiting around each bend for the vulnerable damsel in distress. It splits time following her on the trail and in flashback as she tells her personal back story. The effect is jarring and prevents the film from sustaining a rhythm. Nevertheless her heroic story offers hope and inspiration for others who lost the way. We follow how a determined Cheryl had the gumption to carry on with her mission even if with doubts about it, and blisters and aches all over her body. Ultimately it proves to her that changing her life was simple in comparison.

This is Reese Witherspoon’sbest performance since winning the Oscar for Walk The Line. 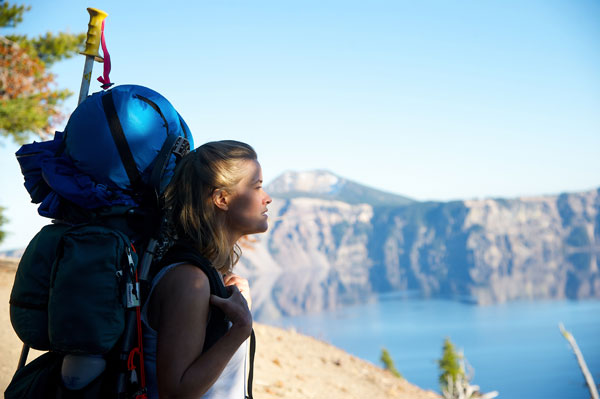