Whity was shot in Spain (town of Alméria) on the same sets where Sergio Leone staged Clint Eastwood’s spaghetti westerns and was shown to be a strained shoot for enfant terrible director Rainer Werner Fassbinder in his filmmaking experience pic Beware of a Holy Whore (71). It was Fassbinder’s lone western (unavailable for thirty years until this DVD release), which turned out surprisingly so well despite all the reports of trouble on the set, and plays out as a bizarre but complex psychological melodrama that is a nagging exploration of fear, loathing and liberation through the revenge of a slave who changes his attitude by fucking a white saloon singer and seeing for himself the truth of his situation.

The human misery story is set in 1878 somewhere in the American Old West, in what seems like the antebellum South. It centers around hunky man-servant Whity (Günther Kaufmann, the director’s lover), the illegitimate mulatto son of mean-spirited wealthy rancher Ben Nicholson (Ron Randell), who adores the dysfunctional nutty but prestiguous Nicholson family and puts up with enslavement to please them. His char-darkened “Mammy,” Marpessa (Elaine Baker), works in the kitchen but remains defiant as she sings freedom songs with timeless lyrics such as “glory, glory Halleljah.” The family consists of nympho hyena-like wife Katherine (Katrin Schaake), whom hubby sics on her a fake Mexican doctor to make love to her and falsely wet her appetite into thinking hubby is dying and, zombie-like nitwit sons, the sadistic Frank (Ulli Lommel) and the brain-damaged Davy (Harry Bär). At a certain point the family members, except for the too-far-gone Davy, individually ask the loyal Whity to kill the buggy-whip obsessive sadistic Ben. The willing slave who is treated abusively, used sexually and is continually humiliated for the family’s pleasure, becomes taken with saloon-singer/prostitute (Hanna Schygulla) and learns through their lovemaking about freedom and a better way of life. The one time Hanna sours on him is when Whity holds out a fistful of money to make love to her, thinking the whore only does it for the money.

Ultimately Whity has taken enough abuse and becomes political enough to rebel when Master Ben asks him to kill his useless family and thereby be sole heir to the estate. The analogy is clearly about American racism and its lingering bad karma, and possible retributions for white society.

It might be too weird, too offensive and too stagy to seem real and a genuine depiction of racism, but it paints a haunting picture of the American landscape that cannot easily be dismissed. It’s the first time Fassbinder worked with cinematographer Michael Ballhaus and the visuals turn out to be stunningly lush and much improved from past films (there will be thirteen other collaborations between them). 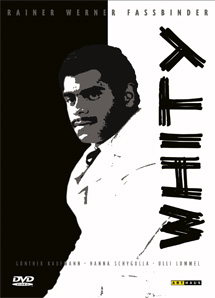