A notorious western known for its production problems and scandal, and can best be appreciated today for being so campy. This psychological oater got the 1940s censors all worked up in a lather over Hughes’ new 19-year-old discovery Jane Russell and her cleavage (the bosomy Jane wore a “Cross Your Heart ” brassiere specially designed by Hughes), causing a scandal and resulting in a box office hit as the public came in droves to see what all the fuss was about (though it took a few years after it was finished in 1941 for it to get released first in 1943 and then in 1946). Howard Hawks became so displeased with producer Howard Hughes’ meddling over details that he walked off the set and the obsessive Hughes fired him. Hughes had to finish the picture himself. It was scripted tongue-in-cheek by Jules Furthman and innovatively shot in black and white by Gregg Toland. The undertone of the film remains both erotic and sadistic, and there’s a strong hint of homosexuality.

Surprisingly, this minor, off-beat western didn’t turn out that bad. It relates the traditional legend of Billy the Kid, but is not historically accurate. But it at least got the Billy the Kid character right, as a confused and misled youngster his biographers usually pictured him as.

Sheriff Pat Garrett (Mitchell) is pleased when his old gambling friend Doc Holliday (Huston) arrives in New Mexico on the stage. Doc traces his stolen horse to the outlaw Billy the Kid (Beutel) but instead of helping the sheriff arrest Billy, he helps him escape to a hideout where Billy meets Doc’s gal Rio (Jane Russell). She’s a beautiful half-breed who falls in love with him even though he treats her like dirt and killed her brother in a gun duel. But Billy can’t resist those boobs and secretly marries her. The three go on the run from the sheriff and his posse, who chase them across the rugged frontier. Doc and Billy go on to fight Indians and get into a number of gun duels together, and all three soon start bickering. At one point, the men dispute over a poker game, and it becomes clear that the horse is a more valuable possession than Rio. It all leads to a final showdown with the sheriff in pursuit of Billy. 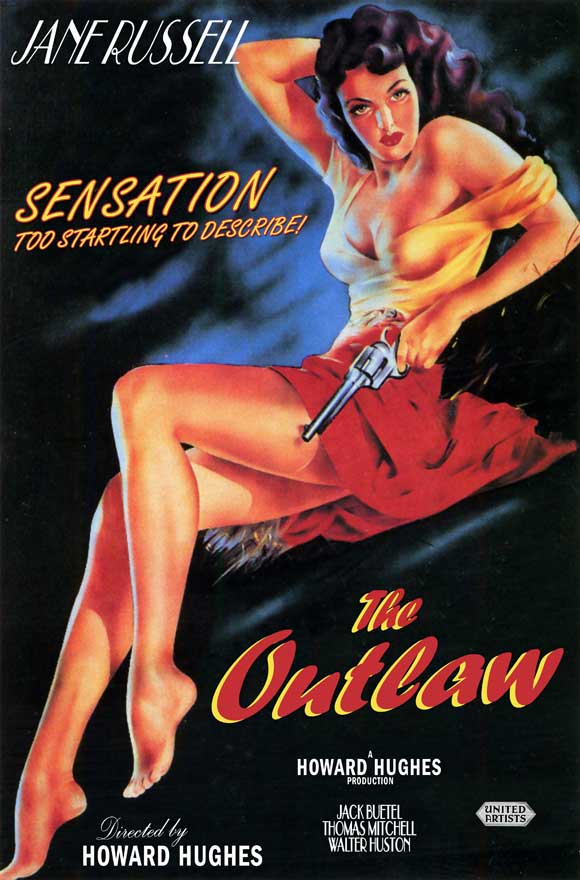