“A very entertaining classic gangster film from the 1940s.”

A very entertaining classic gangster film from the 1940s, and the last of its kind that so ably reflects the 1930s crime films. The 50-year-old James Cagney plays the gangster role he excels in and gave him a long film career as a star. This is his first gangster role in 10 years, as his career was on the skids ever since he made his last film for Warner Brothers in 1942 — Yankee Doodle Dandy. In this comeback he’s a psychopathic gang leader with a mother fixation, who goes nuts when he has headaches and can only be calmed by mom’s sicko love. Director Raoul Walsh keeps the film rolling along at a fast clip, and the outstanding supporting cast skillfully complements Cagney’s over-the-edge portrayal. The screenplay is by Ivan Goff and Ben Roberts from the story by Virginia Kellogg. She received an Academy Award nomination for Best Story – the film’s only nomination. The story was inspired by Cagney’s suggestion to the writers that they tell the real-life gangster story of “Doc” and his mother Ma Barker.

The B&W film opens as Cody Jarrett’s (Cagney) cold-blooded gang consisting of Zuckie, Het, Cotton, Big Ed, and Ryley, rob a train at the California state line and rob it of $300,000 federal money. Cody kills the engineer, the brakeman and the fireman, while a conductor was killed before by Big Ed and Ryley as he tried to prevent them from stopping the train. The gang hides out in a mountain retreat in the High Sierras, where there’s tension between the jealous Big Ed who has big ideas about taking over the gang from the nutty Cody. Verna (Mayo) is the sexy blonde trophy wife of the sadistic Cody, who is into the material benefits of this unfulfilling marriage. Cody’s Ma (Wycherly) is the only one in the world he has feelings for and trusts completely. Ma helps him plan the heists and lets him in on her hunches, as she’s the only one that counts in his life. In one of the three legendary scenes the film is noted for, Cody has one of his severe migraines and he’s calmed by sitting on Ma’s lap. Before they leave their mountain hideout Cody orders Cotton to kill his best pal, Zuckie. He’s too injured from a train steam engine scalding to travel, as he was in on his first heist and gained Cody’s displeasure by mentioning him by name to the train victims. Cotton bluffs killing him, but Zuckie is found by the local sheriff frozen to death before the feds question him. But the lead investigator, Evans, traces Cotton’s fingerprints on a pack of cigarettes and thereby establishes that it was Cody’s gang that pulled the train heist. Cody’s gang is located in their LA hangout, but Cody escapes their police tail. Cody then tries to pull a fast one by confessing to a hotel payroll robbery that took place in Springfield, Illinois, the same time as the train heist. For that crime, he gets only a two year sentence.

Evans realizes Cody’s ruse and with the cooperation of the Illinois prison authorities, he plants undercover T-man Hank Fallon as one of his cellmates and gives him a new identity as Vic Pardo (O’Brien). The plan is for Pardo to gain the confidence of Cody and find out who is fencing the money.

The second legendary scene takes place in the prison dining hall when Cody finds out his mother is dead and goes bonkers by climbing on the table and shouting and knocking out guards who try to subdue him. In the process of being sent to the loony bin, he engineers an escape with the help of gang member and now fellow prisoner Ryley. He takes along Pardo, Ryley, and Parker. Parker is the inmate Big Ed hired to bump off Cody, but his attempt failed and Cody executes him with a spray of gunfire while he’s in the car trunk begging for more air.

Verna is now Big Ed’s dame, but is scared when she learns of the jailbreak. She threatens to leave, but Big Ed tells her if she does he will tell Cody the truth about how she shot his mother in the back. Cody catches up with Big Ed and kills him before he learns the truth. Without Ma to advice him, he fails to discover Verna is a double-crosser and takes the wormy gun moll along with his gang as they plan to heist an LA oil refinery for $400,000. The heist is planned from the strategy used in the Trojan Horse Greek myth. The gang enters their target by hiding in a 5,000 gallon gas truck they bought for $12,000, and having an ex-con (MacDonald) employed by the refinery drive the truck through the security gates.

The film builds to its legendary concluding scene, where the police have the cackling Cody trapped in the oil refinery as Fallon manages to get word to them. The crazed Cody, wielding a tommy-gun, climbs to the top of a huge gas storage tank before he’s shot and the tank explodes in flames as he wildly shoots holes in it. Surrounded by flames, he yells “Made it Ma, to the top of the world!” 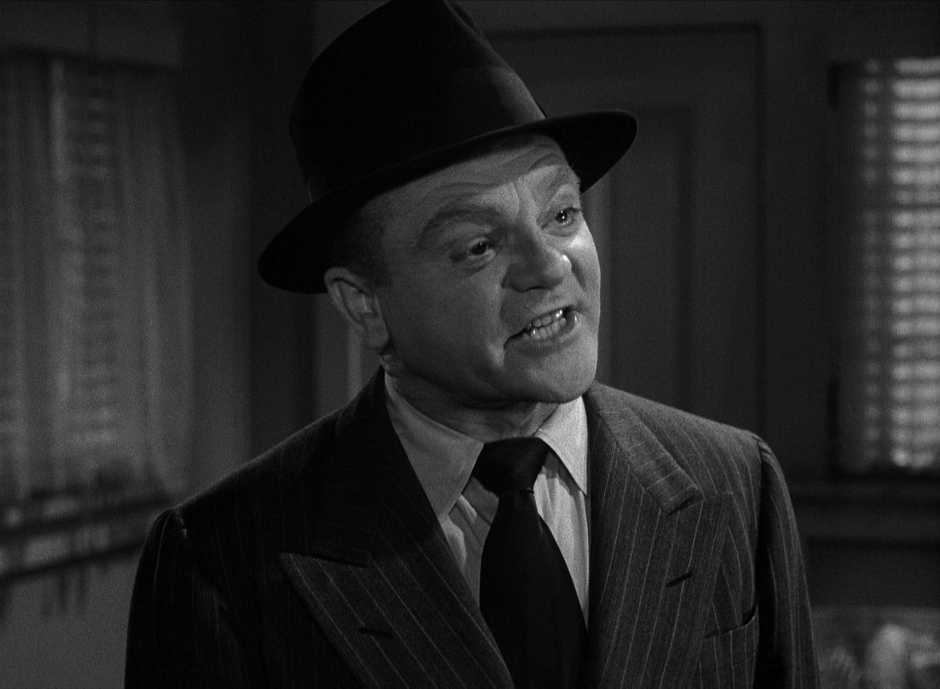