WHEEL OF FORTUNE AND FANTASY

“It’s a wonderfully observant bittersweet film that tenderly expounds on the flaws of its vulnerable heroines.”

An anthology of three short films (a contemporary chamber drama) directed and written by Japanese filmmaker Ryusuke Hamaguchi  (“Drive My Car”/”Asako I & II”). The three plots involve short stories about chance and coincidence, the shared intimacies between men and women,  and the expressions voiced of doubts and desires. The cast is comprised mostly of females, in starring roles.

In the first, titled Magic, a 20something model, Meiko (Kotone Furukawa), listens as her friend Tsugumi (Hyunri) tells her about a special date with a man. Tsugumi is unaware that the man is Meiko’s ex, Kazuaki (Ayumu Nakajima). Meiko confronts him with what Tsugumi said about him.

In the second, Door Wide Open, an irate disgraced student, Sasaki (Shouma Kai), tries to get revenge on an award-winning professor, Segawa (Kiyohiko Shibukawa), who ruined her career, by having the teacher’s friend Nao (Katsuki Mori) attempt to “honey trap” him by reading him sexually explicit passages from his own prize-winning novel. The scheme backfires as the two bond closer over their shared neuroses and self-esteem issues. In an ironic twist of fate their friendship turns out to be more deadly than the intent of the original scheme.

In the third, titled Once Again, shot in downtown Tokyo during the 2020 summer’s COVID lockdown, it comes with a sci-fi premise in the background about a deadly computer virus which has disabled most of the internet. During this time Moka (Fusako Urabe) attends a reunion of her all-girls school, in which she has no recall of anyone. Later, at a train station, she recognizes someone she was close to, Nana (Aoba Kawai). Nana invites her back home, but after talking, they realize that a mistake was made and the two 40-ish women do not know each other. The incident exposes they both are undergoing a mid-life crises.

It’s a wonderfully observant bittersweet film that tenderly expounds on the flaws of its vulnerable heroines. It’s performed well by its talented ensemble cast and is well-staged, but could be faulted for its stories being so slight. 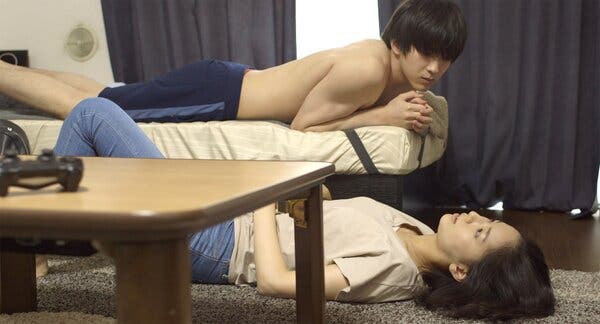