WHAT THE BLEEP DO WE KNOW!?

Directors William Arntz, Betsy Chasse, and Mark Vicente’s lumbering docudrama (part digital animation, part sound bites from experts, and part fictional narrative–cutting back and forth among all three forms) is no Mindwalk (not as stimulating or as entertaining). The mixed bag strategy didn’t work for me. It unfortunately reminded me of those dry academic films shown in my public high school classes, which I sometimes slept through undisturbed in the dark. I felt like snoozing off, at times, but fought it off to get through this exercise like the polite grownup I have become in my later years.

There are some dazzling displays of instructive knowledge, but it too frequently resembles a conventionally dull talking head movie (featuring interviews with “14 top scientists and mystics,” who are too cutely not identified until the closing credits and whose credentials are suspect). The simplistic misplaced narrative of a fictionalized depressed photographer, Amanda (Marlee Matlin), smarting over her hubby’s infidelity, never caught my interest. Amanda’s female roommate is always trying to cheer her up, while she engages in the following activities: walking to work, having a ridiculous metaphysical chat with a black kid playing basketball, and being assigned to cover a Polish wedding she hates covering.

The film asks only big questions that range from those in quantum physics to those about interpersonal relationships, but resounds with a fuzzy mysticism for answers that seem hardly startling. We are reminded many times over that the observer affects the results of what’s observed; we each control our own destinies; we are addicted to our emotions; thoughts can not only change water but violence in a crime-ridden city like Washington, DC. One mystic expert tells us “It only takes one thought here,” tapping her forehead, “for a man to have an erection in his member.” All these revelations didn’t exactly knock me off my seat. Nor was I impressed upon hearing that aging is linked to improper production of protein, something we have no control over. It adds up to a new New Agey pretension to be hip.

At the end of this gloomy work we are supposedly cheered to find the grouchy photographer, who got drunk at the wedding, has had an enlightening experience while inebriated and now finds that she is at one with all those around her. To complete the silliness unveiled, she’s drawing hearts and vines all over her legs with an eyeliner pencil.

What I do know is that the awkward title stinks and the film is dull fare, which is enough for me to grok at the moment. 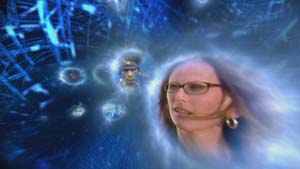