WHAT’S THE MATTER WITH HELEN?

Bloody awful exploitation campy psychological thriller, set in the 1930s in Los Angeles. The same thing that’s wrong with Helen, is what’s wrong with this pic—it’s too loony to be taken either seriously or humorously. It’s written by Henry Farrell, who penned the campy thrillers What Ever Happened to Baby Jane? and Hush, Hush, Sweet Charlotte and tries to write the same screenplay again but can’t find the same resolute formula. Director Curtis Harrington (“Night Tide”/”Ruby”/”Mata Hari”) gets the period detail right, but otherwise finds himself coming up a bit short in his attempt to skewer the Hollywood studio system with satire.

The frumpy prudish widow Helen Hill (Shelley Winters) and the swinging Jean Harlow lookalike divorcee Adelle Bruckner (Debbie Reynolds) are two middle-aged woman who become outcasts in the small town of Braddock, Iowa, in 1934, when their two sons are given life sentences for the brutal murder of a woman, Ellie Banner, who looks like the mothers they hate. After a man stabs Helen in the hand outside the court building and later phones threatening that “she will pay for what her boys did,” the frightened women flee the awful publicity from the sensational trial and go together to Los Angeles to begin life anew with the changed names of Helen Martin and Adelle Stuart. Adelle opens a musical talent school for aspiring Shirley Temples where she’s the dance instructor, and farm girl Helen tags along as piano player. In a riotous number, which made the film for me, the kiddies sing “Animal Crackers In My Soup.”

Both women have guilt that they were bad mothers and their sons refuse any contact with them. Helen’s son has never forgiven her for killing his dad in a farming accident, and Adelle’s son accused her of never being there for him when he was growing up. The grisly murder seems to be an odd way of getting back at the bad mothers.

While Adelle feels better that the school is working out so well and she’s in her own element in Hollywood, Helen withdraws and starts acting increasingly nutso. For salvation, Helen turn to radio evangelist Sister Alma (Agnes Moorehead), a Aimee Semple McPherson type, and becomes a religious nut.

Adelle’s big moment is putting on a show with the kiddies for the Hollywood talent scouts, and things are going well until Helen has awful visions backstage and her screams echo out to the parents in the audience. The pushy mothers are looking to get rich through their daughters, while Adelle is dating a generous millionaire Texan, the single father of one of her pupils, Lincoln “Linc” Palmer (Dennis Weaver), and sees him as her ticket to fame and fortune.

There’s not much surprise in the grisly shocker ending, as we know early on that Helen is not right in the head—so that when she does explode, it just seems like we’re watching another predictable tawdry horror pic for aging actresses. The perfunctory story as directed by the talented Harrington never finds a good balance between scares and camp even though he tries his best to inject some life into it. 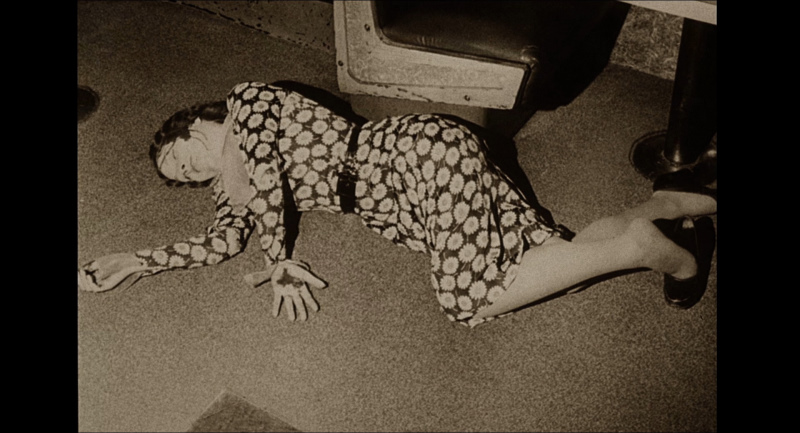