“Insider’s satire on the backroom business aspects of Hollywood.”

It’s based on producer Art Linson’s 2002 fictionalized autobiography about what are the rigors of producing pictures in Tinseltown. Barry Levinson (“Diner”/”The Natural”/”Tin Men”) amiably and briskly directs this insider’s satire on the backroom business aspects of Hollywood, that offers a mildly amusing take on the power games played in Hollywood. It also covers the greed, vanity, shallowness, compromises, perversity and the cutthroat nature of the industry.

It opens with the news that a big-time Hollywood agent committed suicide, which has the Hollywood community curious as to “what just happened.” What happened can be learned by following around the stressed-out big-time producer Ben (Robert De Niro) for the next two weeks. During that time Ben was invited to be in a photo shoot for Vanity Fair’s power issue, showing Hollywood’s thirty powerhouse producers. By the time the photo actually is taken, at the end of the two-week period, Ben’s clout has changed considerably in the business. Which I guess shows that producers could rise and fall rapidly and are not as important as perceived by themselves, the industry and the public.

The beleaguered Ben has to deal with paying alimony of $30,000 a month to ex-wife Kelly (Robin Wright Penn) for child support and at the same time is pining to get back with the spoiled lovely lady without getting a positive reaction. In fact, he’s annoyed that she’s sleeping with his screenwriter friend Scott Solomon (Stanley Tucci). There’s also stress from his high school teenage daughter, Zoe (Kristen Stewart), from another marriage, who disappoints him when he learns at the funeral that she was seeing the hypocritical womanizing suicide agent.

There’s even more stress in his business deals and awkward business meetings, as Ben’s glamorous job is made to seem like not all fun and games and that his power position might not be all that it’s cracked up to be. The untalented producer, who has a problem telling the truth in both business and in his personal life, runs into tsores trying to satisfy the temperamental creative people (the actors, writers and directors) he needs to pull off his deals, while also having to satisfy the money people (the studio bosses) he works for who want things done their way.

When Ben’s latest produced action film, “Fiercely,” that stars Sean Penn, has a bad test screening, cold-hearted imperious studio head Lou Tarnow (Catherine Keener) demands that the drug-addicted eccentric English director Jeremy Brunell (Michael Wincott) cut the scene where a dog gets shot in the head in a close-up despite the director’s objections over artistic creativity. Ben’s told if not the film won’t get screened in Cannes, something both director and producer are looking forward to for their own vain purposes. While Ben’s other headache is that for his next picture, romantic lead Bruce Willis is overweight and adamant about not shaving his grizzly new beard that he’s fallen in love with and the vulgar studio boss named Sid threatens to shut down the project and sue Ben if the beard is not cut. Willis’ new agent, Dick Bell (John Turturro), is a neurotic too wracked with imaginary stomach pains that are work related and is too intimidated by his biggest client, the one who pays his house mortgage, to risk confronting the moody star and offending him by telling him to shave and lose weight.

Since the ones who made this film are Hollywood insiders themselves, their willingness to fully lampoon the industry that feeds them so well can be questioned. Despite that and this being a fluff piece over subject matter that is much too familiar to be fresh material and that much of its self-mockery seems disingenuous, the film nevertheless gets things right (Hollywood is all about the bottom line and its illusionary power trip) and gives the viewer some nurturing laughs when carving up a few turkeys. One can take pleasure in the comical performances of the stars. De Niro has his stomach-churning, always on the go, two-faced materialistic producer character down pat, who just wants to be a power player survivor in the glamor industry and, against all odds, he makes his unlikable character more than somewhat sympathetic as he shows his weaknesses; while Willis steals the show with his outrageous bad boy performance, showing off his nasty egocentric side with an adolescent-like temper tantrum. 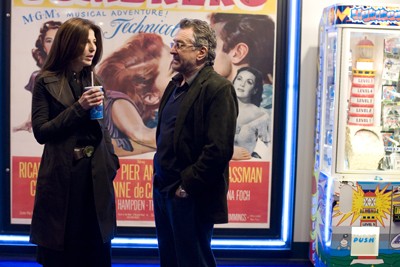 ME AND ORSON WELLES