John Huston (“The Maltese Falcon”/”Key Largo”/”The African Queen”) directs and cowrites with Peter Viertel this b/w grim historical thriller that’s based on the episodic novel Rough Sketch by New York Mirror reporter Robert Sylvester. After seven years from 1925 to 1933 that Cubans suffered under the corrupt and venal regime of President Gerardo Machado y Morales, in 1933 an underground movement in Havana fomented a successful revolution. Because the story was so bleak and the somber ending was not a crowd pleaser, this mostly intelligent and well-crafted film was not a commercial success. It was Huston’s first flop. There were also many other faults to this well-intentioned but ill-conceived film, such as its simplistic and naive take on revolutionary matters, the implausibility of its detailed main revolutionary operation and how it felt too dry for such a passionate themed film.

It opens in 1933 with a Thomas Jefferson quote “Resistance to tyrants is obedience to God.” Soon young student revolutionist Manolo (Tito Renaldo), after a captured colleague is tortured and gives him away as helping to distribute anti-government leaflets, is gunned down in a hail of machine gun bullets on the university steps by the ruthless, corrupt and smarmy dapper dressed chief of the secret police Armando Ariete (Pedro Armendáriz, Mexican actor). Manolo’s sweet bank worker sister China Valdes (Jennifer Jones), who witnessed the drive-by shooting, joins the Cuban underground to avenge her brother’s death, and allows her house to be used for revolutionary purposes by an American, Tony Fenner (John Garfield), posing as a visiting theatrical producer and hiding that he left Cuba as a child. Tony masterminds to use the place to build a bomb and dig a tunnel to kill the president and other high government officials as they attend a funeral in the cemetery across the street from her house for Contreras, a top government official, that Tony plans to assassinate. The chief of the underground (Ramon Novarro, the aging former silent screen matinee idol) has the two joined by four other dedicated revolutionaries–the politically motivated humanitarian Toto (José Pérez), the sincere bike mechanic Miguel (Wally Cassell), the classy grad student Ramon (David Bond) and the colorful dock worker Guillermo (Gilbert Roland). But the plan blows up in their face when the family of Contreras decides to bury his body at a different cemetery. Ariete sniffs out that Tony and China, now lovers, are involved as revolutionists and when he comes to arrest them before they can escape, Tony decides to die fighting and during the ensuing gunfight uses dynamite to kill some of the police. Before he dies in China’s arms, Tony hears the city bells ringing. In a gesture to Hollywood filmmaking, this signals that the revolution has begun.

Jones was badly miscast as the Cuban revolutionist, and all the American actors while speaking English went in and out of their Spanish accents making it hard to believe they were Cubans. Though the film felt important and Huston let on it was made as an answer to Red-baiting in Hollywood and Washington, its fictionalized tale of woe lacked the political wallop to draw in its intended audience (it ended up being dissed by both the right and the left). This is despite the liberal filmmaker and star being believers in the cause, and being on the same page during the entire studio shoot. But, after all, Huston might have had the last laugh. Ten years after its release, Fidel Castro’s revolution overthrew the dictator Batista, who took part in Machado y Morales’ overthrow in 1933. 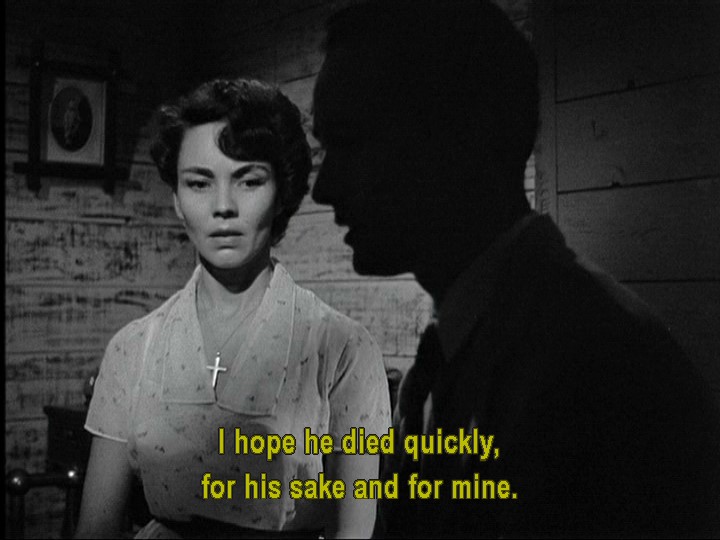