“Muddled, overlong and a not very suspenseful political thriller.”

Otto Preminger (“Exodus”/”Laura”/”Advise and Consent”) collaborates with his screenwriter son from Gypsy Rose Lee, Erik, to direct this muddled, overlong and a not very suspenseful political thriller that involves the search for five rich girls, all from influential families, who while vacationing were kidnapped on a yacht heading for Greece that’s named Rosebud (think Citizen Kane!) by the Palestinian Liberation Army in an effort to bring world publicity for the Arab cause. The seven man crew is killed by a smiling terrorist with a deadly corkscrew, and the girls are evacuated from the boat to a farmhouse in Corsica. It’s based on a novel by Joan Hemingway (grand-daughter of Ernest) and Paul Bonnecarrere. Robert Mitchum was cast in the lead, but was replaced by O’Toole after a dispute with Otto.

The terrorists demand that film clips of their struggle be shown on major European and American TV networks, as a means of swaying public opinion. An undercover CIA agent, born in England, named Larry Martin (Peter O’Toole), masquerading as a Newsweek reporter, is assigned to track down the culprits as a favor to the wealthy Frenchman Fargeau (Claude Dauphin), he’s the wealthy Jewish grandfather of one of the hostages. With the help of an Israeli intelligence officer Hamlekh (Cliff Gorman) and a West Germany agent named Hans Schloss, Larry discovers that the mysterious Englishman Sloat (Richard Attenborough), a Muslim convert, is the madman mastermind behind the plan and the crazed extremist is further planning his own “jihad” to destroy Israel.

Things are kept moving along by the Premingers, as different situations keep popping up; we keep occupied with the scenery to avoid boredom as we hopscotch across the globe from Paris, the south of France, Corsica and Israel (it was shot on location in the French Riviera, Corsica, Paris, Berlin, Hamburg, Haifa and Jerusalem). But things are so poorly executed, the script is so leaden and the acting so wooden, that the political thriller, whose plot is still relevant for today, never seems exciting. One of the kidnapped girls is the daughter of a U.S. senator, who is played by former NYC mayor John V. Lindsay. 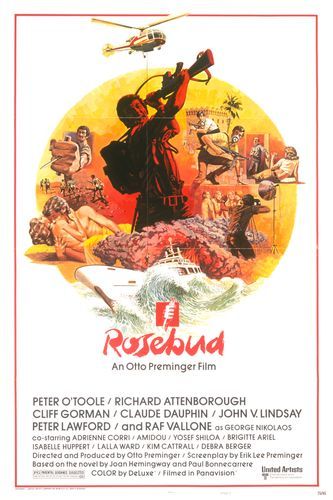