“An offbeat melodramatic Western with added comedy that makes the villain a more arresting subject than the hero.”

An offbeat melodramatic Western with added comedy that makes the villain a more arresting subject than the hero. It has an Oscar nominated script by Jo Swerling and Niven Busch that I thought was only so-so and is filled with too many clichés; Walter Brennan won a Best Supporting Actor Oscar as the legendary Judge Roy Bean, stealing the film from his jealous star Gary Cooper who reluctantly took the part “under protest” and had some more heft added to it in a rewrite. William Wyler (“Friendly Persuasion”/”The Letter”/”Shooting Straight”) goes slumming from his usual high-brow films he was known for and returns to a Western, the genre he first cut his teeth on when he started in Hollywood. He tells the usual story of cattlemen resenting homesteaders in the post-Civil War period and initiating a violent range war. The big-budgeted million dollar film was set in Texas but shot in Tucson. It’s based on the legendary hanging judge Roy Bean, but the story is fictionalized.

Cole Harden (Gary Cooper) is a drifter saddlebum cowboy brought to trial in Vinegaroon, Texas, (later to be renamed Langtry) before the despotic Judge Roy Bean (Walter Brennan) on charges of horse stealing, which calls for a sentence of hanging if found guilty in the judge’s barroom which is converted into a mock court. When Cole observes the psychopathic cattle baron judge is obsessed with Brit stage actress Lily Langtry, he claims to have known her and she gave him a lock of her hair. That’s good enough to get him a suspended sentence.

After its violent and comical opening scenes, it drags its feet with Cole hooking up with attractive homesteader Jane Ellen Mathews (Doris Davenport) and siding with the homesteaders. Jane’s the daughter of farmer Caliphet Mathews (Fred Stone), who gets trampled to death in a stampede while trying to save his ranch that’s set on fire by the judge’s henchmen trying to drive the fence happy farmers off the land. It all leads to the film’s notable classic climax that has Bean alone in an opera theater in Ft. Davis awaiting a performance by Lily Langtry and as the curtain is raised there’s Cole with his guns fixed on the ruthless judge and a shootout follows with the judge dying but not before he meets Ms. Langtry.

The B/W film was brilliantly photographed by Gregg Toland, the cinematographer of Citizen Kane, who gave it a haunting tone. 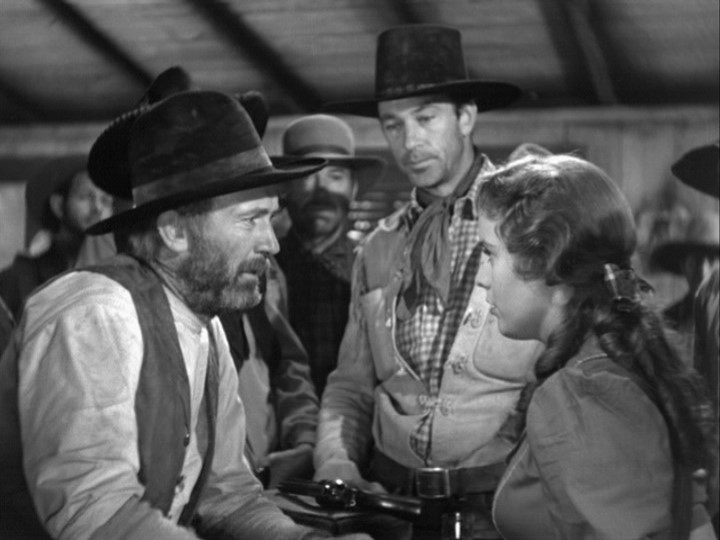