“Quickie update on the werewolf legend.”

Prolific B-film director Fred F. Sears (“Cell 2455, Death Row”/”Rock Around the Clock”/”Earth vs. the Flying Saucers”) helms this quickie update on the werewolf legend. Producer Sam Katzman, known for his cheesy low-budget films, has his name on this modest effort that surprisingly comes out better than most such horror creature films do.

Up in the mountains of a rural Montana town called Mountaincrest (it was shot around the resort town of Big Bear Lake, near L.A.), a mugging takes place in an alleyway on the main street in broad daylight that’s witnessed by an elderly lady. Duncan March (Steven Ritch) turns from vic into an animal and tears apart the mugger’s throat. Sheriff Jack Haines (Don Megowan) doesn’t know what to make of it as the wounds of the dead man could be inflicted by only an animal, but rounds up a posse to go after the killer.

A frightened Duncan, who wakes up in the snowy wilds of the mountain not remembering who he is, visits Dr. Gilchrist (Ken Christy) and his nurse niece Amy Standish (Joyce Holden) for answers. He tells them the last thing he remembers was being in an automobile accident and was treated by two doctors who injected him, but he runs away in fright after refusing medication from Gilchrist and telling them he’s the killer they’re hunting. Reporters get word that something strange is happening, and flock to the town for the story but are not told anything by the tight-lipped sheriff. The sheriff blockades the road after his deputy reported the man they were hunting appeared like a werewolf.

When the two unscrupulous research doctors (S. John Launer and George Lynn) who treated Duncan show up, we learn they treated him with a new experimental drug, a wolf serum, that they hoped would be a cure for radiation poisoning. Evidently that turned the patient into a werewolf. The doctors worried about their reputations, now plan to kill Duncan if the police don’t.

The remainder of the film plays out as your standard monster-on-the-run film, with one special scene in the jailhouse where the unethical doctors come to silence Duncan but get their come-uppance when the regular appearing man turns werewolf under stress and tears them apart. The sheriff and the posse then hunt down Duncan and kill him while he’s running across a bridge.

The film eschewed the usual gypsy folklore superstitions of most werewolf movies and instead kept it contemporary by offering some social commentary about the class differences between the urban person (represented by Duncan) and the hayseeds (represented by the sheriff and his men). Ritch, despite his character being undeveloped, makes his werewolf a sympathetic character, especially since he only kills rotten people and has no trouble with those who are nice to him. 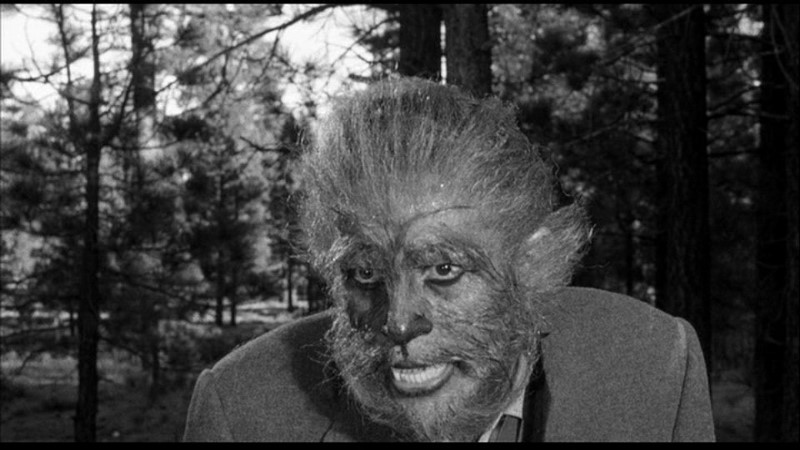