WE OF THE NEVER NEVER

Igor Auzins (“The Gold and the Glory”) directs this overlong and dullish outdated pioneering movie about life on an isolated Australian outback cattle station (large ranch) in the early 1900s. Though marvelously photographed on location in the Never Never wilderness in the Northern Territory and telling a classic Aussie story, under Auzin’s inexperienced direction and the limited screenplay by Peter Schreck, the film is too predictable as melodramatic formula, too lacking in dramatic punch to hold much interest, with not too many events that are memorable (watching the bride fall in the water was one of the highlights), with too many dreary dying scenes and too many vignettes that drag on without any purpose.

It’s based on the memoir of Mrs. Aeneas Gunn, the first white woman to reside in the outback. Filled with Victorian-age cliches, the long slog on primitive turf is almost unbearable. The film is all about depicting the marriage of the 30-year-old genteel Jeannie (Angela Punch McGregor) from Melbourne to the macho shy outback adventurer Aeneas Gunn (Arthur Dignam), the new boss of the 4,000-acre cattle station, and showing how the bride must overcome hubby’s old-fashioned stodgy sexist and racist attitudes and the three white stockmen’s sexism and racism directed at the nomadic Aborigines, and how the spunky bride relates in a nice but patronizing way to the natives who work for her around the house and receive slave wages.

The film cops out and lets the viewer make of the misogynistic cowhands and Jeannie’s patronizing attitude with the natives, whatever they care to. It’s a pic about facing challenges, and for me the biggest challenge was not to over-react with sheer contempt at such an action-less colonialism film. 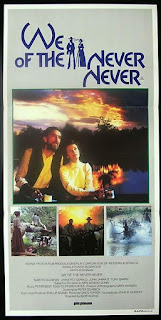 HOW TO MAKE LOVE TO A NEGRO WITHOUT GETTING TIRED

KID WITH A BIKE, THE