This is Clint Eastwood’s (“Mystic River”/”Million Dollar Baby”) better companion piece to his more ambitious but less satisfying bigger budgeted Flags of Our Fathers. It tells of the 36-day battle of Iwo Jima during WW II first from the American viewpoint and now in this Japanese language with English subtitles version from the Japanese perspective, showing how both sides dehumanized their unseen enemies but through the framing device of their letters sent home it showed that most shared the same feelings about love for their family and country. The low-budget ($20-million budget and 32-day shooting schedule) black-and-white film (with its combat scenes magnificently shot in a desaturated color on the beaches of Iceland by Tom Stern) came about when the letters of Lt. Gen. Tadamichi Kuribayashi (Ken Watanabe) to his wife and family were recently unearthed on Iwo Jima and published in a book called Picture Letters from Commander in Chief by Iris Yamashita. Eastwood commissioned his regular writer Paul Haggis to write the story, but since he was too busy with other projects he arranged for his intern, the California-based Japanese-American Iris Yamashita, who never wrote a screenplay, to do the research and hand in a script. She came up with the fictional “everyman” character, Saigo (pop star Kazunari Ninomiya), a small-town baker who didn’t want to go to war but would have rather stayed home with his wife, to tell the war from both the grunt’s point of view and the general’s. Both soldiers are not true believers in the cause, as was most of the army. When Eastwood found the screenplay suitable, Ms. Yamashita worked with Haggis to fine tune it.

This bloody battle, a terrible and costly defeat for Japan, is not well-known in modern Japan except among the few Japanese survivors and the war dead relatives, who kept the memories alive by joining together to hold regular meetings to honor the dead. So the gimmick of having an American film actually be a foreign film and at times making the Americans seem like the villains (they are shown committing atrocities), lets both sides know something about the themselves they might not want to know, how easily they can get caught in moral dilemmas and things about the war they might never have known before.

The battle of Iwo Jima as chronicled from the loser’s side tells of the once envoy to the U.S., Gen. Kuribayashi, who was placed in charge of the battle by the Emperor (probably because he was pro-American and because of the American overwhelming military presence it was looked upon as only a suicide mission). The general upsets the more traditionalist elite officers under him (General Hayashi & Admiral Ohsugi) by refusing to mount a heavy fight from beachfront pillboxes when the Americans landed and instead opted to have his men dig 18 miles of tunnels near the mountain top and try to hold out as long as possible from caves. The general based his strategy on knowing how the American officer thinks after living in America and enjoying their confidences and friendship, and supposedly knew their weaknesses. But throughout the course of the battle most of the officers under him question both his competence and pro-American attitude. The ones on his side are his loyal aide Lt. Fujita (Hiroshi Watanabe) and his near equal in stature, the equestrian gold medalist at the 1932 Los Angeles Olympics, the Baron Nishi (Tsuyoshi Ihara), a hero in Japan who has traveled the world and has also been influenced like the general by his stay in America.

Though following the conventions of the war genre, the film has a unique feel and its power is derived from its simple way at looking at the fighting men for what they are and keeping it much like a tone poem about war. In a much too unnecessary academic way (instead of letting things flow out of the dramatics) it finds plenty of fault with the Japanese soldier who has been brain-washed to die for his Emperor and spew out ignorant hateful diatribes about an enemy he doesn’t know and it also didactically lectures us on the harm wars do to people (both soldiers and civilians) both psychologically and physically. War as hell rings through loud and clear, as it seems that it’s no longer in fashion for even a commercial film to do an old-fashioned John Wayne-like gung-ho Hollywood war film. This no-nonsense, sparsely dialogued and uncomplicated engaging commercial war drama is ably helmed by a director who has grown up and evolved over the years and is no longer suited for his former Dirty Harry image. Though I still have a problem seeing him as the old wise man telling us anti-war lessons while still having his film’s main selling point being the bloody battle scenes, but there’s no doubt that Eastwood is a lot wiser than before and he’s a good craftsman who has an easy way of telling a gripping story. Eastwood should be pleased to know that this film proved to be popular in Japan, as it was accepted for its truthfulness; in America it didn’t get an audience probably because it was only shown in a limited run to certain big city markets even though it was generally critically acclaimed and even nominated for Best Picture. 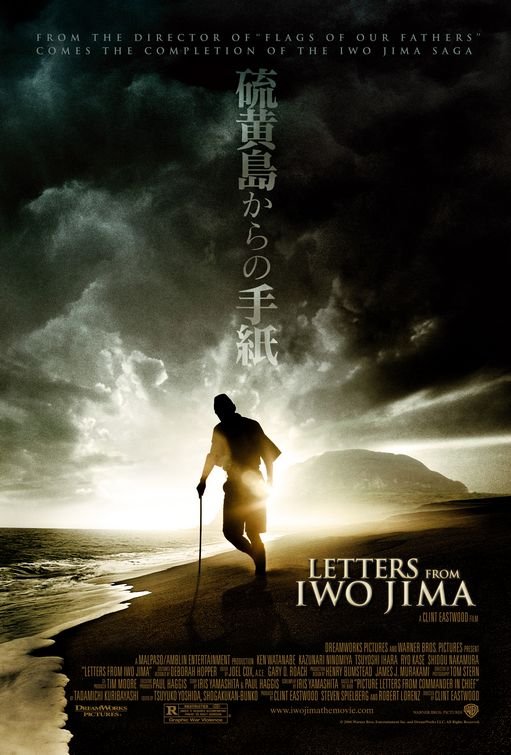