A taut little suspense programmer. One that is very watchable, though the twist in the plot is hardly believable. Tony Riccardi (Sydney Tafler) is a professional killer, but his family thinks that he earns his money as a rare stamp dealer. He is a loving husband to his wife Maria (Blake), and an overbearing but generous older brother to Guiseppi (John Hewer). Tony has paid for his brother’s expensive violin and for his violin lessons, and supports him so he doesn’t have to work so that he can just devote all his time to studying the violin. Tony promised his mother before she died that he would look after his brother and make sure that he became a concert violinist. All the bickering between the brothers is over Tony trying to lead his brother’s life for him. Tony’s girlfriend Helen is disappointed that he doesn’t rebel against his brother.

Inspector Carson of Scotland Yard (Howard) suspects Tony of a long list of assassinations, but can’t prove it. Tony always has the same alibi, he’s playing cards over at Charlie’s bar. Carson is resolved to get him, and states his criminal philosophy: that anything is fair in trapping a criminal.

The inspector gets his chance to follow his philosophy when a Mr.Tyler is murdered outside a cafe wearing a camel’s hair overcoat. The bullet comes from the same gun used in the other assassinations, which leads the inspector to believe that it is Tony who did the hit. As a coincidence, Guiseppi is in the cafe wearing the same kind of coat and is drunk because he is upset that his brother has arranged for a concert in a prominent recital hall even though he is not ready to perform at that level.

Foolishly risking his job, the inspector tells Tony that his brother was shot in front of the cafe. He gambles that Tony will become so distraught, that he will confess to the killing.

It’s not believable that a hardened hit man would confess so easily, but he does.

What this potboiler had going for it was some nice B&W shots of the dark streets of London and through Sydney Tafler’s melodramatic performance, it showed how a killer can be cold-blooded while taking care of business and yet be a devoted family man. Even though Tony’s love was misguided, the killer shows he can be human. The “B” film had good production values and a satisfying but improbable story to tell. 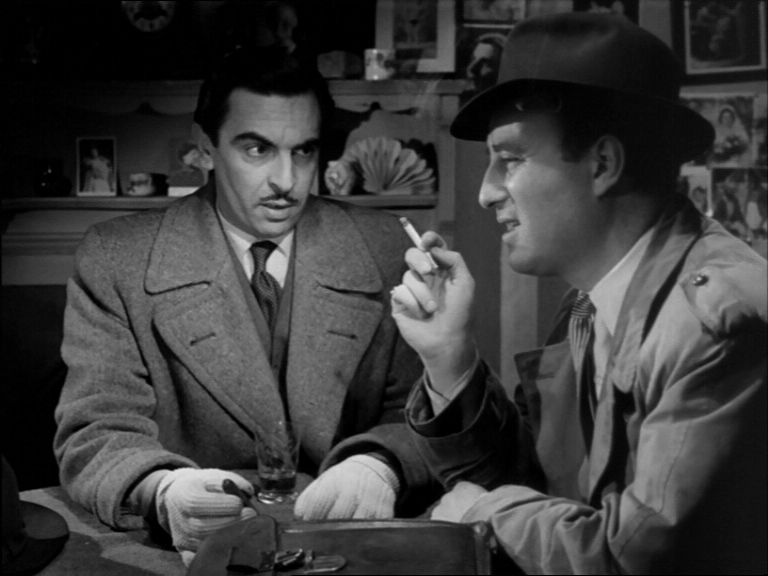