“About as nutritious as your typical fast-food fare.”

I don’t think you need a weather man (or for that matter a film critic) to know how bad things are for the lead in The Weather Man, whose American Dream has come true but success has not made him a happy camper. Director Gore Verbinski’s (“Pirates of the Caribbean”/”The Ring”) offering of a midlife crisis social satire is about as nutritious as your typical fast-food fare. It’s written by Steven Conrad (“Wrestling Ernest Hemingway”), who doesn’t fare as well as he did with his debut writing effort. Set in wintry Chicago, giving it the gloomy setting to match the mood of its depressive hero.

Nicolas Cage stars as a popular middle-aged Chicago weatherman David Spritz who finds success in his career despite not being a meteorologist, but unhappiness in his personal life as disgruntled newscast viewers throw fast-food at him from passing cars (a tired running gag that soon wears out its attempt at slapstick humor) and his personal life is a sad mess. Spritz, a name change for television, is pictured as a first-class jerk with inner demons leaving him in turmoil, who loses his beautiful wife Noreen (Hope Davis) because he can’t communicate with her. Neither can he communicate with his pot smoking 15-year-old son Michael (Nicholas Hoult) or obese dullard 12-year-old daughter Shelly (Gemmenne de la Pena), who both experience growing pains that can be attributed to the dysfunctional family situation. Spritz’s one chance of putting his life back together is from his father, the noted Pulitzer-winning author Robert Spritzel (Michael Caine), who is always there for him. The steady as a rock caustic father sees through his son’s emotional problems as a case of superficiality (just like the pic), and though dying from cancer turns his attention to his son in an attempt to get him to become more solid and stable. But that’s not easy to do when as a weather man he earns $240,000 a year for working only two hours a day, plus extras for personal appearance, and all he does to earn it is just put on a happy face and act like he knows what he’s talking about. A meteorologist actually gives Spritz the weather details and makes the predictions. It results in a cushy lifestyle, luxurious downtown pad and a dream house in suburban Evanston. While he can’t manage to reconcile with his wife, who at one point tells him she can’t stand the sight of him and plans to marry Russ, someone who is always there to comfort her, things career-wise are looking up as Hello America, a national morning television show hosted by Bryant Gumble, calls him for an audition for a gig that will pay over a million a year in salary.

Nicholas Cage is the kind of pitiable hero who goofs up and then asks for our sympathy because he’s really supposed to be not such a bad guy (the director is way too pushy in the asking). But the Cage character is such a shallow, clueless and unremarkable person that there’s nothing about him that makes us want to sympathize or care about his material quests, his drive for self-acceptance, his attempts to reconnect with his family, or please his father before he dies. The satire never worked because it was all so banal and unfunny (a despondent Cage hogs every scene including his narrations throughout with him in pained postures in close-up). Though Caine is terrific as the sober-minded troubled father, and is the only reason I found the film watchable. 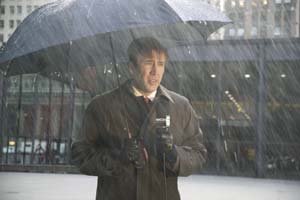