“Unfortunately it has the director’s usual heavy-handed and overstated ploys.“

An overlong, trite, sentimental, overwrought and manipulative horse story film directed by Steven Spielberg (“Schindler’s List”/”E.T.”/”A.I”), that is beautifully shot, has a few spectacular battlefield sequences and its heart is in the right place satirizing war as inhumane to both humans and horses. Unfortunately it has the director’s usual heavy-handed and overstated ploys. It’s based on the 1982 best-seller children’s novel by British author Michael Morpurgo, and is written by Lee Hall and Richard Curtis. The book was previously adapted as award-winning New York and London stage productions, that used life-size horse puppets from the Handspring Puppet Company for its magical theatrical offering. The movie is respectful to the book but veers more to being an old-fashioned tear-jerker film, like the way they used to make ’em, that’s shot in a conventional way and leads to a happy ending that doesn’t seem to be honestly earned.

It opens in the lush countryside of Devon in 1914, where tenant farmer Ted Narracott (Peter Mullan), working a Dartmoor farm, at a horse auction pays more than he can afford to buy a lively red bay half-Thoroughbred steed instead of a plow horse needed to work the rocky fields of his farm. His long-suffering practical wife Rosie (Emily Watson) calls out her unappreciated Boer War hero, gimpy and alcoholic hubby as a selfish fool for putting the family at risk to losing the farm to the smarmy and avaricious landlord Lyons (David Thewlis) by this unnecessary purchase. To the rescue comes their teenage son Albert (Jeremy Irvine), who raises the horse and against all odds trains the headstrong horse he names Joey to do the plowing. The kid becomes attached to the horse, so at the onset of World War I when his impoverished feckless dad sells the horse to the army for the war effort, the kid sulks until the horse-friendly army officer buyer assures him that he’ll look after the horse as his own mount and return him to Albert after the war.

The gist of the film follows the horse through the four years of war, where the kindly Brit cavalry officer Captain Nicholls (Tom Hiddleston) is killed in battle in rural France, on Flanders Field, while riding Joey in an unsuccessful bloody charge against the Germans. There are then various owners, that include the German army using the horse to pull heavy military equipment and a kind French teenage girl Emily (Celine Buckens). Since Emily’s parents are dead, she lives with her gentle jam-maker grand-father (Niels Arestrup) on a farm and provides the pet horse with good vibes and an ample amount of fresh hay. But during the course of the war the Germans take the horse from her and use him to to pull field ambulances and heavy artillery weapons, which will shortly kill him if the horse doesn’t escape. In the horse’s strange odyssey, he falls in love with the black mare Triphorn, also in captivity by the Germans. Joey eventually makes a dash for freedom across the ‘no-man’s land’ of a war-torn battlefield and gets entangled in barbed wire. There he’s freed by both a Brit and German horse lover soldier, a gesture to the universal goodness of mankind. And, as daffy as it may seem, it is through the horse’s eyes we try to make horse sense out of the brutal war. When we see Albert as a Brit soldier fighting in the trenches and observe his runaway horse nearby trying to survive on the battlefield, we can easily predict that horse and owner will soon miraculously reunite. The corny entertainment that ensues will either charm the viewer or turn him off.

Spielberg, ever the talented technician, manages another commercial film guaranteed to be a box office hit by making this superbly crafted but creatively jejune Disney-like young-adult film seem artistic, even if its calculating and shallow storytelling transpire into the artifice of a harmless horse opera. The unsubtle John Williams score tells you the exact moments it expects you to be aroused, in case one needs further prodding of when to get with the program and feel the horse’s pain. 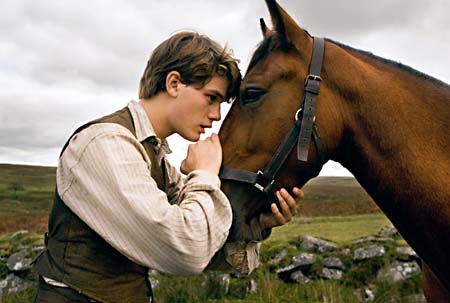 LOVES OF A CARMEN, THE