“It features a cracking good paranoid performance by Aaron Eckhart.”

A convoluted paranoid mood thriller directed with paranoia by the actress-turned- director April Mullen (“Badsville”/”Gravy Train”), a Canadian Algonquin, and is written with vitriol by Tim Doiron. It’s about video “monitoring,” implanted tracking/controlling chips, “compromised” phones and people who die from gun wounds but with no bullets found in them. The political conspiracy film is closely aligned with Alan Pakula’s “The Parallax View” (1974) but is far less effective.

It features a cracking good paranoid performance by Aaron Eckhart as Arthur Bretnik, who stars as an ex-cop and conspiracy podcast co-host, and also as the fickle narrator. Arthur goes to the desert town Wander, where he’s hired to do private detective work for the lawyer Shelley Luscomb (Heather Graham), possibly a relative of his, who gets him the case of a mystery woman (Deborah Chavez) podcast caller, who claims that her daughter was murdered and that the authorities are in on it. Arthur investigates in Wander and finds it’s a place the mysteries he’s long believed in seem to be also happening there.

Arthur and his veteran partner Jimmy Cleats (Tommy Lee Jones) operate the “Deep Web Podcast” from the remote travel trailers “compound” called “Middle of Nowhere.” They cover the nightly news the regular media usually avoids and don’t take seriously, and attract the curious and gullible far-out listeners they chat with about such alternate world issues as the “Illuminati,” “Big Brother” and UFOs.

Arthur still can’t get over when two years ago a car killed his daughter, leaving him depressed and on prescription meds. As a keepsake, Arthur keeps her fortune cookie fortune in a Lucite block on his keychain. The crash left his wife (Nicole Steinwedell) catatonic and in a nursing home.

During his investigation in Wander, Arthur breaks into the morgue and follows up on anonymous tips, as he warns others of the dangers faced by the whistle-blowers. Arthur uncovers there the exact same exit wound as those on his wife and on several different victims, as well as an underground bunker and a mysterious woman (Katheryn Winnick) who seems to be in all the wrong places at all the wrong times.

Kathryn Winnick and Raymond Cruzare become caricatures of the town’s medical examiner and corrupt sheriff, who conceal the same evidence as was found in the death of Arthur’s daughter.

The film ends up with a disappointing conclusion after it sets up an eerie mood with a sense of danger always at hand, but it fails to make its story resound with meaning or be lucid. It might be liked by some for its weirdness and it’s fun moments, or might be hated by others because its story is so muddled and the visuals are so blurred because of its jittery hand-held camera-work.

Doiron’s script is filled with twists and menace around every corner, I just don’t know if that’s a good thing rather than a weird thing. 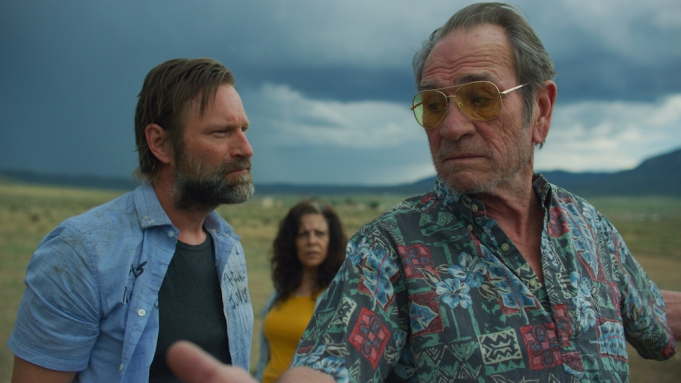